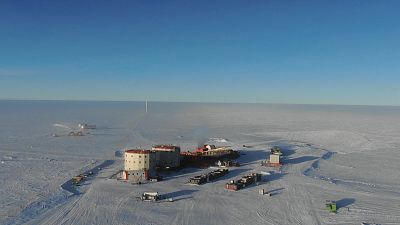 In this special episode of Climate Now, we explore the latest data from the frozen continent and explore how this extreme environment is changing as the planet warms.

The latest Copernicus data shows the Antarctic sea ice extent was 26 per cent below average last month - the second lowest on record.

The Ross and Amundsen seas, highlighted in the map below, were particularly low on sea ice.

In terms of temperature anomalies, East Antarctica experienced a kind of heatwave last month. A mass of warmer air swept across the continent, pushing temperatures at the Concordia research station from the usual minus 55 degrees Celsius to a new all-time high for the station of minus 11.5 degrees.

Temperatures in Antarctica can vary a great deal, but Jonathan Wille, Polar Climatologist at the Université Grenoble Alpes says this time was different.

"It was sort of a new show for the climate in Antarctica that has left quite a few of us scratching our heads and sort of making us reassess what we thought was possible for the Antarctic climate," he told Euronews.

"In terms of what we know for the Antarctic climate this is totally unprecedented. Our records, of course, for Antarctica go back not as long as the rest of the civilised world, but this is an event on a par with what we saw with the heatwave in the Pacific Northwest in June of 2021 - an event that kind of redefines what we thought was possible for the climate system."

Willie studies the effect which led to the heatwave. He explains, "On March 15th, we had what is called an atmospheric river transport a large amount of heat and moisture from the lower latitudes to the higher latitudes and cause a bit of rain and melting on the Antarctic coastline. Then, as the moisture went further inland, it created very heavy snowfall."

The rare number of people in Antarctica at this time of year were acutely aware of the changes around them.  At Concordia Research Station the residents are used to a climate that is high and dry. Living over a thousand kilometres from the coast and over three thousand metres in altitude, they are surrounded by a deeply frozen desert. However, in mid-March, all that changed.

Over a period of a few days, the temperature rose to its new all-time station high of minus 11.5 degrees. The previous high for Concordia was minus 13.7 degrees Celsius, set in the middle of the austral summer in mid-December. With the relative warmth came unusual amounts of snow, prompting scientist Julien Witwicky to take photos like the one below of fresh snow covering the ancient Antarctic ice.

"We had an accumulation of 10 cm of snow. This is more snow than usually falls in a year. So, instead of easily walking around on hard-packed snow, we were sinking into powder for several days. It reminds you more of the French Alps than Antarctica," said Witwicky who is spending the winter at Concordia as part of his glaciology work at the Institut Polaire Francais.

"For this episode we could afford to go out dressed much more lightly, uncovering our faces, simply wearing a long-sleeved t-shirt with a good fleece on top and that was enough to stay outside for a long time. That's really impossible in normal conditions in March," he told Euronews.

Even if we can't attribute this directly to global warming, you could imagine that it might be linked to it.

The unusual snowfall at Concordia which accompanied the rise in temperatures could be evidence of a wider trend of increased precipitation in Antarctica. The German Kohnen station, which is also at altitude and far inland, has reported a 20 percent rise in snowfall in the past 20 years.

"This is something which is also predicted as part of the global heating. When the atmosphere gets warmer, the atmosphere can hold more moisture and more moisture means more snowfall," Olaf Eisen, Professor of Glaciology from the University of Bremen and Alfred Wegener Institute told Euronews.

In the wake of the record temperatures, another dramatic image from Antarctica made the headlines in March. The Sentinel-2 spacecraft took 'before and after' photos of the 1.2 square kilometer Conger ice shelf - an area the size of Rome - which collapsed after years of instability.

It is premature to link the collapse of Conger to the March heatwave. However AWI scientist Hartmut Helmer told Euronews that the satellite images are consistent with a known effect of rainfall on glaciers - the liquid water will penetrate into existing cracks in the ice, and then freeze.

"So when you freeze this fresh water in the cracks, then you actually crack the whole ice shelf, and then that causes these little sugar cubes", as can be seen in the image on the right.

"Such heatwaves might cause in certain areas this kind of disintegration," Helmer concludes.

A question many are asking is whether extra snowfall could offset even a small percentage of the ice lost to the oceans around Antarctica? Although there is some contribution from the snowfall, the general consensus is that Antarctica will continue to lose mass, as the warmer oceans and air contribute to thinning the ice shelves, making them more and more unstable.

Eisen, from AWI, has just come back to Europe from one of his regular visits to Antarctica. He says that the rise in snow accumulation "is counteracting the loss of ice we observe in the West Antarctic parts, but it is not enough to really compensate. It's not bringing it to a zero balance for Antarctica at this stage."

Another veteran of Antarctica, Alain Hubert, Chairman of the International Polar Foundation, stresses that the global warming effects around the continent are continuing every day.

"What I can say, because I'm on the terrain and I can see that for more than 15 years, is that all these ice shelves which are released from the continental ice - so direct effect on the level of the ocean - that will increase and continue. That's for sure, because the water is warming up and we're not going to change that in the coming decade, that's for sure," he says.

Hubert also underlines the need for more observation to understand the complex Antarctic environment. While Europe or north America may be peppered with high quality instruments to help feed climate models, Antarctica remains poorly understood, simply because it's so difficult and expensive to monitor.

"I realise that it's really, really difficult for the scientists," he says. "We need more observation in the Antarctic, as in the Arctic as well. Definitely."

Finally, let's take a quick look at the latest data from the Copernicus Climate Change Service for the rest of the world. The data for March 2022 indicates that globally, temperatures were 0.39°C warmer than the 1991-2020 average for this time of year. This makes it the fifth warmest March on record.

However, if you thought it was a bit on the chilly side where you are then you may be right. The European-average temperature for March 2022 was 0.43°C lower than the 1991-2020 average. The month was the third coldest March in the last 10 years.