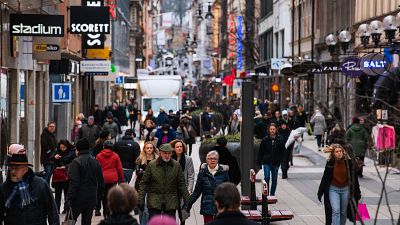 Sweden is about to become the first country in the world to report on carbon-based emissions.

This will mean products made abroad will have their carbon emissions added to the nation’s overall total.

For now, the decision has only been recommended. Sweden’s export market, international aviation and shipping industries will need to be managed before the country can adopt the measure.

Karin Lexén, secretary general at the Swedish Society for Nature Conservation, describes the country’s proposal as “historical”. But with a lack of international standardisation for the calculation process of carbon-based emissions, also known as overseas emissions, she says reporting will be complex.

Who came up with the idea of consumption-based emissions?

The recent announcement came from a cross-parliamentary committee, after a number of organisations within Sweden campaigned for wider environmental responsibility.

The committee was influenced by a report from the Chalmers University of Technology, Sweden. In the study, researchers claim that changing consumer behaviour is the only way to comply with the Paris Agreement, with issues like buying sustainable tech, adopting a plant-based diet and driving less being suggested in order to achieve the goal.

In the study, researchers claim that changing consumer behaviour is the only way to comply with the Paris Agreement

Both education and a discussion of greener alternatives is also believed to be key.

Why does Sweden want to target this type of emissions?

Ranked fourth in the EU in the Eco-Innovation Index, Sweden ranks highly for climate action. With a 2045 net-zero target, the country is a pioneer in carbon taxation.

Whilst other countries are shaping their net-zero targets around emissions produced within their own borders, Sweden continues to show determination with its new goals.

Annika Hedberg, a senior analyst at the European Policy Centre, says “targets like this will encourage measuring the problem and progress of achieving it”.

By extending ‘emissions liability’, Sweden has taken on the challenge of becoming an environmental world-leader. Their actions expose the countries which are underestimating the severity of climate change.

Elisabetta Cornago, a climate expert at the Centre for European Reform, says “I am not sure many other countries in the EU are ready to change their approach to national target setting right now.”

Over half of Sweden’s total emissions are linked to imports, according to the Global Carbon Project, which may also explain why the country is wanting to account for them.

Is Sweden really a greener nation in comparison to other countries?

Sweden has set an example for climate change awareness for some time, and is a front-runner with its acceptance of renewable energy. It is also home to environmental activist and icon Greta Thunberg, who for a long time has fought for more action on the climate crisis.

She has long argued rich countries need to take responsibility for – and reduce – consumption-based emissions. Her consistent voice in calling for this change may have impacted her country’s decision to take action.

The wealthy Nordic nation has a lot of positive environmental exposure, with more than 80 per cent of Swedes living within three miles of a conservation site. About half of the Swedish population believes international climate actions will benefit their economy. Whereas in France, only 18 per cent believe they will benefit economically from international climate agreements.

There has also been a number of initiatives set up to combat plastic waste. In 2017, a Swedish supermarket chain cut back on the use of plastic labels by opting to tattoo its fruit and vegetables instead.

Drinks giant, Coca Cola, also began using bottles made from polyethylene terephthalate (PET) bottles in Sweden in 2019, in a first step towards expanding its use of recycled plastic in western Europe.

Why are other countries less engaged with overseas emissions?

The UK, Norway, France and New Zealand are some of the countries that have legally committed to reach net zero emissions by 2050. But there are many questions surrounding whether these countries are on track to achieve their Paris Agreement targets.

With Sweden’s new decision, other countries are expected to step up their ambitions. Last year, the Climate Change Performance Index (CCPI) reported that the G20, which includes France and the UK, are responsible for about 75 per cent of the world’s greenhouse gas emissions.

Countries such as India and China have also signed the Paris Agreement, but their level of emissions still continues to increase due to investment in coal-fired power stations and the use of fossil fuels in industrial sectors.

The European Geosciences Union has also estimated that 22 per cent of global carbon emissions stem from commodities that are specifically made in one place, but are for sale in another.

Sweden has set itself tough targets for the future. With continued innovation and dedication, it hopes to become the first country to inspire many.

He hopes it will influence “other European countries to follow suit”.