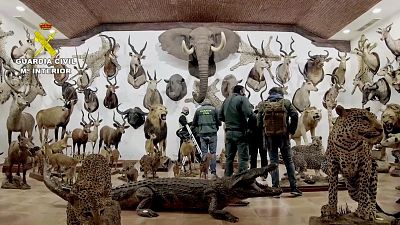 Police in Spain have seized one of the largest discoveries of taxidermy animals in Europe as they investigate potential smuggling.   -   Copyright  Reuters   -
By Maeve Campbell  with Reuters  •  Updated: 11/04/2022

Police in Spain have seized one of the largest discoveries of taxidermy animals in Europe.

Authorities are investigating a potential smuggling, after a giant warehouse in Valencia was found to contain stuffed animals including rhinos, polar bears and elephants.

The Guardia Civil discovered over 1,000 specimens in a 50,000 square metre industrial warehouse in Betera, Valencia on Wednesday, it declared in a statement on Sunday.

The haul of stuffed animals included over 400 protected species, including some that are extinct, such as the scimitar oryx, or severely threatened, such as the Bengal tiger.

The haul of stuffed animals included over 400 protected species, including some that are extinct.

The warehouse owner is under investigation for smuggling and crimes against flora and fauna or, as it often called, wildlife crime. He has not been arrested.

Investigators estimate the stuffed animals are worth €29 million.

The discovery was the culmination of an investigation by Valencia police's Nature Protection Team, which began in November 2021 when agents became aware of a possible private collection in Betera.

What is wildlife crime?

Wildlife and animal crime takes many forms from hare coursing, trade in endangered species and persecution of protected species.

When is taxidermy illegal?

The practice of taxidermy is legal in the EU - provided the animal has not been illegally killed.

So people intending to sell or buy a rare or endangered taxidermy animal must be fully aware of the Convention on International Trade in Endangered Species (CITES) as the penalties for breaking the law can be severe.

CITES is an international agreement made between governments that restrict the trade of a wide range of wildlife, including animals, birds and reptiles. This is in order to protect populations that could be threatened by excessive trading.

180 countries have signed the Convention worldwide. The agreement currently offers protection for over 35,000 species (including plants and trees). Although many of the animals on the list are not currently classed as endangered, the regulations are in place to ensuring sustainable trading and to protect the survival of these species.

Thousands of baby eels found in suitcases at Amsterdam airport