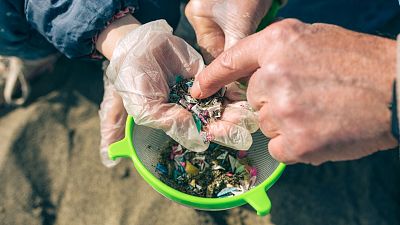 People are inhaling microparticles that linger in the air, say researchers in a recent study.

Findings from the University of Hull in England indicate that evidence of microplastics has been found in almost all people tested.

Last month, similar microscopic particles were found in human blood, implying the particles can travel around the body and potentially lodge in organs.

It follows an earlier discovery in babies - who, according to a recent study, have 15 times more particles in their bodies compared to adults.

Microplastics’ ability to penetrate our bodies is made even more worrying by scientists' findings that the material provide a comfortable environment for bacteria with high antibiotic resistance to thrive in.

Microplastics are small pieces of plastic, often about the same size as sesame seed, and approximately five millimetres long. They are a result of plastic pollution, and are present in a variety of products, from synthetic clothing to plastic bottles.

They consist of carbon and hydrogen atoms bound together, and often contain chemicals such as phthalates and polybrominated diphenyl ethers (PBDEs).

These chemicals leach out of the plastics after entering the environment.

What do we know about microplastics?

As a growing field of study, little is known about their impact, but recent research indicates that their nano size allows for ease of access into water filtration systems, which means they often end up in the ocean. This poses a threat to birds and aquatic life, who often mistake the particles for food.

People are already known to breathe in the tiny particles too, and they are easily consumed via food and water. According to the United Nations Environment Programme, plastic microbeads were present in cosmetics and personal hygiene products as far back as 1970, when natural ingredients were being replaced.

Has there been much more research on the health and environmental effects of microplastics?

This long-term exposure has only recently begun to gain attention, with the latest studies raising more concerns about microplastics' impact on human health as the effects are unknown.

A 2021 study in Brazil found that polyethylene, a microparticle used in plastic bags, was one of the most common particles present in 13 out of 20 people analysed. Researchers concluded that the “contaminants in the respiratory system [were likely] following inhalation.”

A recent review which assessed cancer risk in relation to microplastics, states that more thorough research is “urgently needed” with regards to “whether and how they can transform cells and induce carcinogenesis.”

How can we tackle such a tiny problem as microplastics?

In 2019, the European Chemicals Agency (ECHA) made an attempt to reduce human exposure to these particles by proposing a restriction on microplastics placed on the EU/EEA market.

This means firms would have to stop adding microplastics to almost all products, from cosmetics to detergent, which in turn would prevent the release of 500,000 tonnes of microplastics over a 20 year period.

The legal restriction is expected to become law by the end of 2022, however certain environmental groups claim the proposal has some major loopholes.

Some sectors may have up to eight years to drop microplastics, while ‘biodegradable’ plastic - microplastic that does not break down as quickly and completely as the term may imply - could escape the ban altogether.

“The EU is right to build on its reputation of tackling plastic pollution with this new ban,” says European environmental chemicals policy officer, Elise Vital. “But it must avoid being sidetracked by industry sponsored loopholes.”

In an attempt to clean and reduce the microplastics already exposed to the ocean, a number of solutions have been proposed globally.

Last year, a project conducted by the UK’s Plymouth Marine Laboratory found that a small collection of mussels has the potential to filter 250,000 pieces of microplastics in an hour.