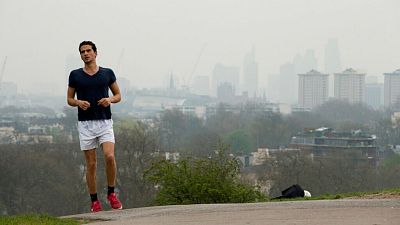 Air pollution is a bigger killer than HIV/AIDS, tuberculosis and malaria combined, according to a recent report from the Air Quality Life Index (AQLI).

Particulate pollution has a more devastating impact on life expectancy than smoking or even war, the scientists say.

It is cutting short the lives of billions of people, with the average global citizen losing 2.2 years of their life to today’s air pollution levels. If nothing changes then that will add up to 17 billion years of life lost around the world.

The problem is being made worse by the climate crisis, with high temperatures leading to wildfires that increase air pollution. This creates a dangerous cycle, the researchers say. Fossil fuel burning - in particular coal - is feeding the problem.

Air pollution is the greatest external threat to human health on the planet.

“Air pollution is the greatest external threat to human health on the planet," says Professor Micheal Greenstone, one of the scientists who created the AQLI, “and that is not widely recognised, or not recognised with the force and vigour that one might expect.”

Though the scientists say that lockdowns have proven we can reduce pollution and a different future is possible, it all depends on whether governments choose to act.

In the UK, air pollution is thought to be responsible for up to 36,000 deaths every year and some studies say it could be higher. Ruth is one person who has seen the impact of this firsthand.

“My son first started having breathing difficulties in the heatwave of 2018,” she says.

“If you remember that one, it was around 34 degrees (Celsius), some days cooler, for about two and a half months in London and the air quality was really bad.”

Ruth says that by November, her son had seven asthma attacks and they were on their third visit to the hospital. It was then that a paediatric respiratory specialist told her air pollution could be part of the problem. He said that they should avoid walking along busy streets, main roads and next to traffic.

“If you haven’t experienced the impact, people might not be as concerned about it,” she explains. Unlike plastic pollution, where images of a beach covered in waste paint a direct picture of the consequences, the effects on our respiratory health aren’t so visually clear.

“I think because we can't see air pollution that maybe makes it slightly harder to communicate.”

“It's very much an issue that is also outside of London and that kind of that surprised me as well when I was first looking into it.”

Though she lives in London, after looking at air quality maps Ruth says she found that levels of PM2.5 and PM10 were high in towns and cities across the UK. It’s not something that can easily be escaped.

Is air pollution the only issue?

It isn’t just air pollution threatening our health but a whole host of other impacts of climate change that could be putting our lungs in danger - many of which we are surprisingly unaware of.

As we emerge from the effects of COVID-19, climate change could be the next biggest threat to our respiratory health according to a new report from the Economist Intelligence Unit (EIU).

Tom Delahoyde is the managing director of Chiesi UK who commissioned the report and he says it was done on behalf of patients suffering the health consequences of climate change, “right here, right now”.

Climate change is disproportionately affecting the economically disadvantaged and those with underlying health conditions, such as asthma or chronic obstructive pulmonary disease (COPD) are most at risk.

“One of the key findings in this report is that respiratory health issues are actually exacerbated by the climate crisis, which is putting vulnerable people at risk, and actually worsening inequality within our society,” he says.

“Heatwave related issues particularly impact the elderly, so the 65 and above age groups, but also infants, where children’s lungs are still developing, can be impacted by this.”

What can be done to prevent this health crisis?

Ruth is a member of Mums for Lungs, a group campaigning for everyone to have clean air as soon as possible.

They want to see elected officials tackle the problem of air pollution through actions such as expanding the Ultra Low Emission Zone (ULEZ) in London, commitment to WHO clean air guidelines as part of the Environment Bill and a reduction in car ownership.

“I think there's a sense of urgency about it as well because children grow up quickly,” she adds.

“When there are targets being set, you know, we want to get all diesel cars off the road by 2030, I think ‘that’s 10 years’. My son is going to be 15, nearly fully grown and then what difference is that going to make to him? Nothing.

“We want to make a difference to this generation that's growing up.”

Policymakers really need to prioritise respiratory health in the fight against climate change.

A lack of action is a problem around the world, not just in Europe. A recent analysis from the Clean Air Fund found that 20 per cent more global aid goes to fossil fuel projects than it does to tackling the air pollution they cause.

Delahoyde says tackling the impacts of the climate crisis on respiratory health has to be a joint effort between policymakers, businesses and health professionals.

“Policymakers really need to prioritise respiratory health in the fight against climate change and companies need to take meaningful, measurable and independently verified actions,” he concludes.

“Only then can we encourage and track progress towards a greener, healthier society.”