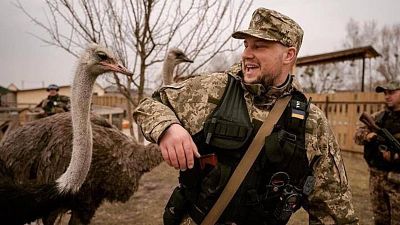 UAnimals are working alongside the Ukrainian army to rescue animals caught up in the Russian invasion   -   Copyright  UAnimals
By Ben Anthony Horton  •  Updated: 06/04/2022

This Ukrainian rights organisation is fighting to protect animals from the impact of the Russian invasion.

UAnimals has uncovered a string of rights violations across the country - inflicted not just against civilians, but against the creatures they were forced to leave behind.

“When the war started, we realised every day that it's becoming worse and worse,” says Olha Chevhaniuk, co-founder and CEO of the rescue force.

“The Russians shoot adults, children and even animals. They have no moral values at all.”

What dangers are the animals in Ukraine facing?

Operating across a network of bomb shelters, abandoned towns and bombarded cities, UAnimals locates and rescues displaced creatures caught up in the conflict.

Their members scour the country in search of at-risk animals - some of which have been without food, water and shelter for weeks on end.

“We found a shelter in Borodyanka where animals were left in locked cages,” continues Chevhaniuk.

“There were 485 dogs there at the start of the war. Yesterday our volunteers were able to reach it, and only 150 dogs were still alive.

“There was no food, no water. Hundreds just died, suffering.”

The organisation says this is a familiar story all across the country, where thousands of animals remain trapped due to the conflict.

UAnimals is appealing for so-called ‘green corridors’ to be established - demilitarised zones which would act as evacuation routes for some of Ukraine’s threatened creatures.

“Currently it’s only once our army is able to reach these territories that we are able to deliver food, search for cages, provide transport, veterinary doctors and whatever else we need to save the animals,” says Chevhaniuk.

“Having green corridors to animal shelters is super important and would save lives.”

End the war in order to end the suffering

While many of the UAnimals team remain underground, its co-founder, Oleksandr Todorchuk, has joined the Ukrainian army.

He is one of many civilians who have taken up arms after the Russian invasion. But despite recent success on the battlefield, Chevhaniuk and her team know that the only real solution to the war is peace.

“I believe in victory. I just hope it will come as soon as possible.”

You can donate to UAnimals here.

Watch the video above to find out more about Ukraine’s displaced animals.

In each barrel of Russian oil you import, there's Ukrainian blood - MP