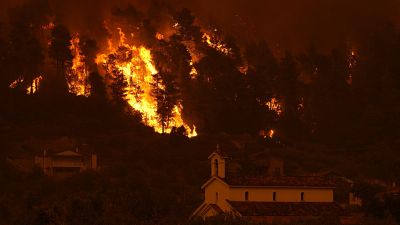 We must halve emissions by 2030 in order to avoid the worst effects of the climate crisis, says the latest report from the UN's Intergovernmental Panel on Climate Change (IPCC).

However, the IPCC scientists also emphasise that it is not too late to limit global warming to 1.5°C by 2030.

Today's report outlines how keeping in line with Paris Agreement goals will only be possible with immediate and substantial action.

The paper published today is from the IPCC's third working group, and focuses on how we can mitigate climate change. The first report looked at the causes of the climate crisis, while the second outlined the severity of the situation.

In order to stay within 1.5°C of global warming by 2030, it is essential that global greenhouse gas emissions reach their peak by 2025 at the latest. This means they need to be reduced by 43 per cent by the end of the decade. Methane levels must also be cut by a third, according to the paper.

“We are at a crossroads. The decisions we make now can secure a liveable future. We have the tools and know-how required to limit warming,” says IPCC Chair Hoesung Lee.

The publication highlights that between 2010 and 2019, greenhouse gas emissions were at the highest level in human history. Over that same period, however, the report notes that the cost of renewable energy has decreased by up to 85 per cent.

Lee adds that across the world, there has been a renewed focus on legislation tackling deforestation, improving energy efficiency and accelerating a switch to renewable energy sources.

“I am encouraged by climate action being taken in many countries,” says Lee, “there are policies, regulations and market instruments that are proving effective.

“If these are scaled up and applied more widely and equitably, they can support deep emissions reductions and stimulate innovation.”

Despite the commitments made at COP26, current climate pledges are still on track to rise by 14 per cent - a far cry from the 45 per cent decrease we need by the end of the decade.

“We left COP26 in Glasgow with a naïve optimism, based on new promises and commitments,” UN Secretary-General António Guterres said in response to today’s publication.

He adds that the main issue is the enormous emissions gap which has been all but ignored. The science is clear but most major emitters aren’t taking the steps needed to fill the “inadequate” promises they have already made.

“Investing in new fossil fuels infrastructure is moral and economic madness,” he added.

Leaders and delegates from countries on the frontlines of the climate crisis have also responded to the IPCC report with similar frustration at the level of perceived inaction.

“How many reports do we need before we actually do what we’ve said we’ll do?” asks Tina Stege, the climate envoy for the Republic of the Marshall Islands.

She emphasises that the G20, the world’s biggest emitters, are failing to take radical enough action on curbing emissions.

“It’s long past time to deliver on promises made,” Stege adds.

How can we mitigate climate change?

The report is not without solutions though, and focuses on how global warming can be limited with practical options from across all industries.

Its authors point to carbon capture and storage (CCS) as one possible way to handle emissions but also note that there are limitations with this technology at present.

“Currently global rates of CCS deployment are far below those in modelled pathways limiting global warming to 1.5°C or 2°C,” the paper reads. It suggests that policy changes, increased public support and innovation could help improve the technology.

Changes in the construction industry are also heavily discussed in the report, noting that “cities and other urban areas also offer significant opportunities for emissions reduction.”

One of the working group’s co-chairs, Jim Skea, highlights the innovation already seen across the world, with new carbon-neutral building projects emerging in most major cities.

“We see examples of zero energy or zero-carbon buildings in almost all climates,” says Skea. “Action in this decade is critical to capture the mitigation potential of buildings.”

The role of financial institutions is outlined in the report too, with the authors emphasising the need for investment gaps to be closed.

One of the major criticisms levelled against net-zero policies is the perceived cost. However, economists concluded last year that climate inaction will be far costlier than a net-zero transition.

This same finding is outlined in today’s IPCC report.

“Without taking into account the economic benefits of reduced adaptation costs or avoided climate impacts, global Gross Domestic Product (GDP) would be just a few percentage points lower in 2050 if we take the actions necessary to limit warming to 2°C or below, compared to maintaining current policies,” explains co-chair Priyadarshi Shukla.

One of the repeated points made in the report is that the policy and behavioural changes needed to mitigate global warming, will also help fundamentally improve public health across the world.

For example, building more liveable cities is encouraged in the paper from an emissions reduction perspective. But the authors note that there are many other positive effects from this type of urban planning, including lower air pollution levels and general improvements to public health.

“Climate change is the result of more than a century of unsustainable energy and land use, lifestyles and patterns of consumption and production,” said Skea.

“This report shows how taking action now can move us towards a fairer, more sustainable world.”