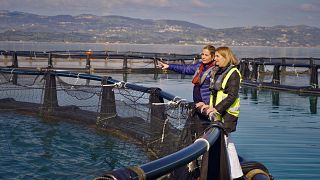 The coastal region of Aquitaine in southwestern France is known for its sand dunes, fine Bordeaux wines and delicious seafood.

Maïder Taudin is a fishmonger at La Poissonnerie de l’Aiguillonin in Arcachon. The family-run fishmonger sells all kinds of raw and cooked fish, molluscs and crustaceans. She says many customers who come into the shop ask for the fish skin to be removed.

"We take the skin off the fish, because in general, people don't eat it, especially when cooking fillets - so the skins go in the bin, we don't use them for anything."

Press play to listen to this article

euronews · An ocean of opportunities: The women transforming the blue economy

But one woman's trash is another woman’s treasure. A few years ago, local entrepreneur Marielle Philip began using the skins to make fish leather. She picked up the ancient Nordic tradition from her mother, collecting the unwanted byproduct to produce hides.

“In Aquitaine, there is a big seafront, there is the Arcachon Bay - a lot of fish is consumed here. There is aquaculture, especially trout farming. So why not upcycle the waste from this sector - the fish skins - and transform them into leather?”

From her small workshop, Marielle harnesses raw skins that have been discarded by fish shops and wholesalers.

It's the same as classic leather. The only difference is that there’s a scaled pattern...

“The process is quite long. It takes about two weeks to go from the raw skin to dyed and finished leather. The skins are soaked several times - going in tanning and colouring baths, and then they undergo a mechanical treatment - they are flattened and stretched, attaining better flexibility and a certain finesse ... During the process, we only use crushed plants, no other chemicals, so it’s quite environmentally friendly."

To finish Marielle presses the leather, adding varnish and glitter.

“It's the same as classic leather. The only difference is that there’s a scaled pattern - just like ostrich leather, crocodile or snake leather, which also has a pattern, so it’s in the category of so-called exotic leathers.”

Today, Marielle sells her "marine leather" online and supplies small-scale local manufacturers. Thanks to support from the European Maritime, Fisheries and Aquaculture Fund this innovative upcycling of discarded fish waste has given rise to a successful business.

Like other kinds of exotic leather, fish skin can adorn a wide variety of trendy apparel, accessories and footwear. French fashion label Pas Kap likes to use fish leather in many of its products. Craftswoman Karine Coutière, explains.

“Baby shoes, women's shoes, starting from a small cardholder to large pieces of luggage, a handbag, a small pouch, a bracelet, a key ring - it's endless. I find that fish skin has something precious and original about it while being very respectful to the environment. I am proud to be able to work with this raw material, very proud!”

The success stories of women like Marielle's tend to stand out in the male-dominated fishery sector. In Europe, less than 4% of workers on fishing vessels, and under a quarter of those in aquaculture, are women.

But on the Greek island of Kefalonia, a female-led aquaculture company is attempting to stem that tide.

Led by Lara Barazi, since the late 1990s Kefalonia Fisheries has increased its production 30-fold. It also makes a point of keeping things sustainable. The company rears sea bass and sea bream in floating cages for customers all over the world.

"A majority of our management team are women: we have some fantastic women in our R&D, our sales, our quality control, our H.R. department - basically, I think we're all women, except for in two departments."

While men at the firm still tend to do more physical tasks - like feeding the fish, or diving to inspect the nets - women have taken up key management and administrative roles. Embracing that diversity, Lara says the company also makes it easier for its employees to balance work and family obligations.

“We are very flexible in terms of maternity leave and working remotely. If someone says to me, listen, I have to leave a bit early because I have to pick up my child and then I'll work maybe a bit later or on the weekend - that's perfectly fine for me.”

...not all work here is only for men. A woman can do just as well!

Working at sea can be physically tough, especially during winter, but that hasn't stopped Katerina Katsika. She's been rearing fish in cages for 30 years and is now in charge of making sure the population stay healthy. Every year, Katerina's team, who are mostly young women, vaccinate a million small fish to protect them from disease.

"In winter it does get very cold and choppy at sea, but I think that the women who choose this kind of work do enjoy it. It's nice to be working so close to nature when you love the sea. I don't think they see any problem in that, they like it!"

Adelaida, an Ichthyologist at Kefalonia Fisheries, also says there's a misconception that the work is too physically demanding for women.

"You do need physical strength for some of the tasks, but not for all of them, so not all work here is only for men. A woman can do just as well!"

Research is a vital aspect of any aquaculture business - production is reliant on the hatchery which is both a laboratory and a farm.

Evi Abatzidou manages the hatchery at Kefalonia Fisheries. With her colleagues, she oversees the broomstock, monitoring the growth of young fish from tiny eggs to larvae and juveniles. The fish stay in the hatchery until they are large enough to be moved to the sea cages.

“We select the best fish - the fast-growing fish with a better shape. And we use them to be the parents for the next generation. The hatchery procedures are very scientific - they have to be very precise, and the work has to be very careful. Women are very good at this.”

...they can be engineers, researchers, scientists, food specialists, and they can even be captains if they want.

Kefalonia Fisheries female staff also play a leading role in quality control, and, typically for the fishery sector, process and package the final harvested product. The feminisation of the business at all levels, however, is seen as the industry standard to follow.

The Hellenic Aquaculture Producers Organisation, which represents 80% of Greece’s aquaculture sector, runs outreach projects for young women. The body's Director of Communication Ismini Bogdanou says the goal is to dispel misconceptions and encourage more women to take up a career in the industry.

“We're trying to introduce in schools knowledge on aquaculture. We do seminars, write articles on women in aquaculture, and present women the different paths, career paths they could take if they wanted to join this sector. It's not just packaging and being on the water all day, but they can be engineers, researchers, scientists, food specialists, and they can even be captains if they want.”

Achieving gender equality will take time - but the fishery industry is slowly but surely drifting away from the outdated stereotype that this is a sector only for men.