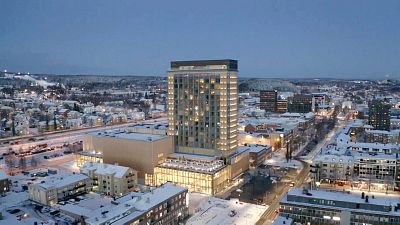 Between the towering trees of Sweden's Bothnian coastline, a new skyscraper is bucking the trend of the traditionally carbon-heavy construction industry.

It’s yet another wooden structure to adorn the streets of Skelleftea - a city that is tackling the climate crisis one newbuild at a time.

“Everyone thought that we were a little bit crazy proposing a building like this in timber,” says Robert Schmitz, the architect behind the construction.

How can construction be less environmentally damaging?

The cultural centre is home to six theatre stages, a library, two art galleries, a conference centre and a 205-room hotel.

It’s all built from over 12,000 cubic metres of wood - harvested from forests just 60km from the town.

The design is part of a wider effort in Skelleftea to wean the local construction industry off environmentally-harmful materials.

According to the United Nations Environment Programme, building work was responsible for over 38 per cent of global energy-related carbon emissions in 2015 alone. The production of cement, meanwhile, is the largest single industrial emitter of CO2 in the world.

By contrast, wood sequesters carbon dioxide, binding it from the atmosphere and storing it for good.

Those behind the Sara Cultural Centre - the second tallest wooden tower in the world - claim the skyscraper will capture nine million kilograms of carbon dioxide throughout its lifetime.

But the building’s sustainable focus doesn’t stop there. It also boasts solar panels capable of powering the edifice, and storing excess energy in the basement.

How does this skyscraper communicate with those around it?

Designers say the cultural centre can "communicate" with nearby structures and distribute surplus energy as and when required.

"It analyses the building’s energy usage and it can make decisions on how we should run it based on available energy levels," says Patrik Sundberg, business unit manager at local energy firm Skelleftea Kraft.

Sundberg claims that, over time, the skyscraper will "learn" the building's energy needs.

"We have an AI system to help the skyscraper make these decisions every minute, 24/7."

A city built from the forest

Wooden construction is nothing new in Skelleftea, which has relied upon the abundance of nearby forestland to construct its buildings from as early as the 18th century.

From an impressive timber bridge stretching across the local river, to a more recent three-storey parking garage in the city centre, everything in Skelleftea feels like it’s made from the trees that surround it. In most cases, it really is.

And with the town's population set to expand in the coming years - from 72,000 to 80,000 inhabitants by 2030 - locals are keen to keep this green tradition alive for a new generation.

"In all of this change we are going through, with all of the new people moving here, we feel safe that we have this new environmentally-friendly material," says Evelina Fahlesson, the town's deputy mayor.

"If we didn't have that tradition, what would the city become then? What would the municipality become? A totally different kind of thing."

"A good thing with the wooden frame is that you can change it over time, which you can’t do with houses," says the firm's head of business, David Sundstrom.

"Forestry and timber houses have been here for a thousand years in Scandinavia. We have lived in timber houses, which have the bonus that you can change the walls and alter the building’s arrangement."

This is another benefit to carbon-sequestering wood, which currently accounts for over 20 per cent of all new multi-storey buildings in Sweden.

Tomas Alsmarker, head of innovation at Swedish Wood, says the country has seen a huge change in building materials over the last five years.

For over a century, Sweden had banned wooden homes above two storeys high. Now it is the material of choice in the country with the largest percentage of forestland in Europe.

"For all buildings up to eight storeys high, the question is not whether it’s possible to do it in wood. You should ask why we should not do it in wood.”

Watch the video above to find out more about Sweden’s wooden city.