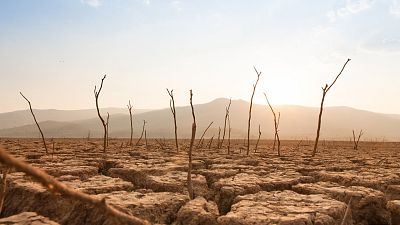 Climate change is the biggest catastrophe we face, so why are we not reporting on it?   -   Copyright  Canva
The opinions expressed in this article are those of the author and do not represent in any way the editorial position of Euronews.
By Ingrid Newkirk  •  Updated: 27/03/2022

Ingrid Newkirk is the founder of PETA. Here she gives us her take on the lack of media coverage concerning climate change, as the world is overwhelmed by other news stories. She explains what the single biggest thing we can all do to cut our carbon footprints is and how it would affect ecosystems around the globe.

Reading the news, one’s mind and emotions have to juggle a lot of balls: the war in Ukraine, the famine in Sudan, natural disasters from Australia to Japan, the pandemic’s latest variant, trafficking of drugs and women, the rising cost of oil and of living, Boris Johnson’s political antics, and, of course, such trivial goings-on as Kim Kardashian’s romantic dinners and Brooklyn Beckham’s wardrobe.

It’s a lot to juggle, but sometimes it seems that the big ball Greta Thunberg threw to us, the climate catastrophe one, is rolling away. And if we stop paying attention, it will soon roll out of reach.

Since the United Nations stated that a global shift towards vegan eating is necessary to combat the worst effects of climate change, cutting out – or at least cutting down on – meat, eggs, and dairy is the one simple action every single person can take, right now, to help.

And if governments are serious about reducing human dependence on planet-polluting animal-derived foods, these should be heavily taxed, just like cigarettes, petrol, and diesel.

The Union of Concerned Scientists lists meat-eating as the second most serious environmental hazard facing the Earth.

So how much do people need to cut down? A recent analysis of the food system’s impact on the environment found that massive reductions in meat, egg, and dairy consumption – including cutting back on beef by 90 per cent and animal milk by 60 percent in Western countries – are essential to avoiding dangerous climate change.

That means globally, the average person will need to eat 75 per cent less beef, 90 per cent less pork, and half the number of eggs.

The average person will need to eat 75% less beef, 90% less pork, and half the number of eggs.

In fact, meat production has such a devastating effect on all aspects of our environment that the Union of Concerned Scientists lists meat-eating as the second most serious environmental hazard facing the Earth.

Animal agriculture is unsustainable. When land is used to raise animals instead of crops, precious water and soil are lost, trees are cut down to clear areas for grazing or factory farm sheds, and untreated animal waste pollutes rivers and streams.

It’s 18 times more efficient to produce a plant-based chicken alternative than to raise flesh-and-blood chickens. Thankfully, there is an endless variety of healthy and eco- and animal-friendly vegetables, fruit, grain, and legumes.

A recent study by the University of Oxford found that eliminating animal products can reduce a person’s food-related carbon footprint by 73 per cent and, if everyone went vegan, global farmland could be reduced by 75 per cent.

All this is in addition to the personal benefits to their health - reducing their risk of obesity, heart disease, and cancer.

The link between climate change and animal agriculture has been extensively documented, showing that at nearly every stage of meat, egg, and milk production, climate-changing gases are released into the atmosphere, potentially disrupting weather patterns and ecosystems.

Animal agriculture is responsible for nearly a fifth of human-induced greenhouse gas emissions, according to the UN.

We all have the power to change that and help protect the planet by reducing the amount of greenhouse gases that our diets contribute to climate change by up to 60 per cent - simply by avoiding animal-derived foods. With all the delicious vegan choices widely available at supermarkets and restaurants nationwide, there’s no reason to keep eating foods made with animal ingredients. It’s like throwing petrol on a blazing fire.