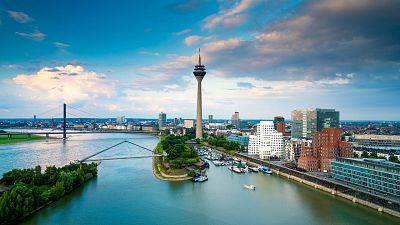 Dusseldorf, Germany   -   Copyright  Canva
The opinions expressed in this article are those of the author and do not represent in any way the editorial position of Euronews.
By Jos Delbeke  •  Updated: 24/03/2022

Jos Delbeke is the EIB Climate Chair at the European University Institute’s School of Transnational Governance. Together with co-authors and senior research associates Jan Cornillie and Peter Vis, he gives us his take on why Europe should reduce its dependence on Russian gas.

The invasion of Ukraine by Russia has made Europe’s energy dependence painfully clear, just as major policy decisions are being negotiated within the EU on climate and energy.

As the cornerstone of the European Green Deal, the EU has adopted ambitious goals of climate neutrality by 2050, and a net 55 per cent reduction of emissions by 2030 compared to 1990. The policy proposals to reach those goals predate the Russian invasion of Ukraine.

A major question is what are the consequences of the Russian invasion, and the economic sanctions imposed by the EU, on Europe’s energy transition?

Five key elements are what stand out.

1. Scrambling for alternative energy resources in the short-term

In the coming weeks and months, the outlook is grim.

Energy prices for oil, gas and coal are sky-high, with knock-on consequence on the price of electricity. Higher energy prices add to existing inflationary pressures, leading to a drag on economic growth and a risk of ‘stagflation’.

Natural gas is critical for heating homes and for significant sectors of European industry, such as chemicals and fertiliser production. Germany and Italy are particularly vulnerable.

In the short-term, even without a ban on oil and gas from Russia, the maximum use of all available Indigenous energy resources is indispensable.

In the short-term, even without a ban on oil and gas from Russia, the maximum use of all available Indigenous energy resources is indispensable. Measures from suspending the phase-out of old nuclear power stations, to the ramping up of LNG (liquified natural gas) purchases from a wider range of supplier countries, and even a heavier reliance on the use of coal and lignite in power generation are all part of the answer.

The latter risks reversing the decade long decline in greenhouse gas emissions from the power sector, but it should be temporary, allowing for Green Deal-aligned diversification to gather steam. Climate concerns must remain focused on the medium- and long-term while there needs to be a readiness to be flexible in addressing short-term needs.

2. A doubling down on energy efficiency and renewables

The policies proposed under the European Green Deal would make the European economy less dependent on energy imports and therefore more resilient. The current crisis only reinforces the need for such measures.

High energy prices, like we see today, are already accelerating energy saving measures. Governments at all levels must boost policy efforts, removing barriers such as overly lengthy and complicated permitting procedures, and support the electrification of heating, transport, and industry.

Governments at all levels must support the electrification of heating, transport, and industry.

Consumers of energy will respond to higher energy prices if they can afford to by insulating homes, installing heat pumps, or fitting solar panels onto rooftops, but more public financial support is needed as well.

Governments should intensify their efforts to ensure that energy infrastructure has the flexibility required for varied power generation with substantial shares of renewable energy. And they should press ahead more pro-actively with their policies on demand-response, including digitalisation and storage.

European governments have responded with a wide range of solutions, from hand-outs to households and imposed price ceilings for gas and electricity prices, to reduced tax rates. Given the scarcity of financial resources, governments should focus their support on those who really need it – which is not always being done.

That may concern many more people than those traditionally faced with fuel poverty, and may even cover a third or more of Europe’s population, especially in less wealthy member states.

To finance these interventions, additional VAT revenues received on energy products or windfall profits on energy companies can be used. While the challenges facing governments are acute, price support measures must be temporary so as not to undermine long-term decarbonisation.

Governments should plan for a longer period of higher energy prices and even more economic and social pressure piled on by increased food prices, unemployment and disrupted supply chains.

4. Keeping a cool head when intervening in energy and carbon markets

Some governments want to go further and are proposing major changes to the current energy market regulation.

When it comes to electricity, they are criticising the design of European wholesale markets and want it to be replaced by other models preventing severe price spikes.

Suggestions have been made to impose price caps at European level.

However, such changes should be well thought through as they may lead to unwanted side effects, like making the short-term supply problems even worse by undermining investment incentives, destabilising suppliers or diverting energy resources away from Europe.

A polluter-pays charge is what decarbonised energy solutions, such as renewable hydrogen, need to become economically viable.

Wholesale market price controls will almost inevitably require rationing. Equally, discretionary price interventions on Europe’s carbon market should be resisted. Clearly, the ongoing negotiations on reform of the EU’s Emissions Trading System should not make the availability of carbon allowances even more constrained in the short-term, given the likely pressures on carbon prices coming from higher coal use.

However, a polluter-pays charge is what decarbonised energy solutions, such as renewable hydrogen, need to become economically viable. Carbon price signals remain part of the solution of reducing reliance on Russian gas and oil - and are essential to incentivise the investment in the low-carbon alternatives.

The European Green Deal already supports the development of new climate-neutral technologies such as green hydrogen, biochemicals, or decarbonised materials. This would substantially reduce reliance on traditional fossil fuels, such as oil, coal or natural gas, and should therefore be accelerated.

The first pilot installations are already being put in operation but a massive scaling up of these technologies will be key.

Infrastructure investments, e.g. for transport of electricity and hydrogen or transport and storage of captured carbon, will be important facilitators. But make no mistake: the EU will never be fully autonomous in energy and materials, because the supply chains of renewable and nuclear energy resources, as well as green hydrogen and associated products, will also involve non-EU countries.

The European Green deal needs to be complemented by a trade strategy focused on diversification of essential imports, whether of green hydrogen from places where it can be produced cost-effectively, or rare earths and precious metals needed for an electrified economy.

A geopolitical approach to the Green Deal is required

As a result of the devastating war in Ukraine, the EU now finds itself paying a heavy price for its excessive energy dependence on Russia. Determined and sustained support for Ukraine must be matched by a profound and sustained decoupling of energy links with Russia.

A geopolitical European Union can do nothing less than ensure its energy security in a manner compatible with its climate objectives. There are no easy answers, and a short-term and temporary deviation from purely climate considerations must be accepted in the interests of finding structural solutions to Europe’s energy security.

Fortunately, in the medium- and longer-term, the goals of the European Green Deal coincide with these related to the EU’s energy security.

So, the strategy of doubling down on the energy transition is sound.

A climate-neutral Europe will however still not be fully energy independent. The EU should not add to nationalist pressures because of the aggression of one country, but rather uphold bilateral and multilateral cooperation on trade, climate and development while reducing over-dependence on one country for any of its essential energy or materials.