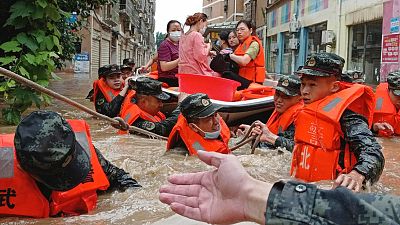 Every person on Earth will be covered by early warning systems in the next five years, under a new plan announced today by UN Secretary-General António Guterres.

The World Meteorological Organisation (WMO) will lead this ‘ambitious’ plan to alert people to the increasingly common extreme weather events around the globe.

Over the past 50 years, a weather, climate or water-related disaster has taken 115 lives a day on average, according to a recent WMO report on disaster statistics. The latest IPCC report makes clear that half of humanity is already in the danger zone.

“We must boost the power of prediction for everyone and build their capacity to act,” the UN chief declared via video message today, World Meteorological Day.

Currently, one-third of the world’s population - mainly in least developed countries and small island developing states on the frontlines of climate change - are still not covered by early warning systems. In Africa, a staggering 60 per cent of people lack coverage.

“This is unacceptable, particularly with climate impacts sure to get even worse,” says Guterres.

According to current national commitments, global emissions are on course to rise by almost 14 per cent this decade - despite governments knowing that a 45 per cent reduction is needed to keep the crucial limit of 1.5 C degrees warming alive.

What are early warning systems and how do they help?

Early warning systems alert people to the imminent dangers of floods, droughts, heatwaves or storms. They take many forms, aside from a message flashing up on your phone.

Indeed, sometimes a mobile or email alert may not be the right channel when communication infrastructure is under threat too, or in areas with low phone ownership like South Sudan. Radio broadcasts or appointing a village point person with a megaphone could work best in some local contexts.

The UN has also identified a need to strengthen the systems for identifying disasters in the first place. Technological advances have enabled us to monitor real time atmospheric conditions on land and at sea and to effectively predict future weather events using computer models.

Lessons from the past must be learnt too, says the WMO.

Just 24 hours warning of a coming storm or heatwave can cut the ensuing damage by 30 per cent.

Just 24 hours warning of a coming storm or heatwave can cut the ensuing damage by 30 per cent, according to a global adaptation report in 2019. And early warning systems bring a tenfold return on investment.

“One of the highest returns of investments is reached by improving the weather, water and climate early warning services and related observing infrastructures,” says WMO Secretary-General Prof Petteri Taalas. “There is a need to invest 1.5 B USD (€1.4 billion) during the coming five years to improve the quality of the services and related infrastructures especially in the Least Developed Countries and Small Island Developing States.”

For people in these most climate-vulnerable places, feeling the brunt of climate change-fuelled weather, the warnings cannot come soon enough.

Climate change is increasing the amount of water vapour in the atmosphere, leading to extreme rainfall and deadly weather; while warming oceans whip up more powerful tropical storm- worsened by rising sea levels.

“Early warning systems save lives. Let us ensure they are working for everyone,” Guterres added.

“I have asked the World Meteorological Organisation to lead this effort and to present an action plan at the next UN climate conference, later this year in Egypt.”