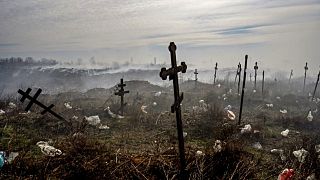 Alarms went off around the world on 3 March, when a fight erupted just outside the biggest nuclear plant in Ukraine.

The Russian military had seized the power facility and occupied the premises after intense bombing that could have compromised the stability of six nuclear reactors at the Zaporizhzhia power plant.

Just a few days earlier, combat over the control of Chernobyl resulted in increasing radiation levels in the security zone around the old nuclear site on the outskirts of the Ukrainian capital Kyiv.

Reckless behaviour by President Vladimir Putin has sparked fears over contamination and even a broader war involving nukes. The possibility of a nuclear disaster is only the tip of the iceberg when it comes to the countless consequences the invasion of Ukraine will inflict on the environment.

When you include the increasing emissions due to military activity, the spillage and toxic clouds caused by the destruction of industrial and fuel storage facilities, contamination of water and soil from heavy metals and chemicals from bombs and weaponry, and even the destruction of crops and wildlife - the impact is staggering.

It may take decades for Ukraine and the world as a whole to recover from the impact of the conflict.

It may take decades for Ukraine and the world as a whole to recover from the impact of the conflict.

“You can look at some areas in Northern France and Belgium affected by World War I where you still can’t farm because there’s unexploded ordnance in the ground - or the soil is contaminated by heavy metals and residues from chemical weapons,” says Doug Weir, Research and Policy Director of the Conflict and Environment Observatory (CEOBS).

“You can see disruptions in the landscape, where trenches or shells set off… So damage can last for 100 years.”

“I think the wider question is what level are you recovering to? Because when you damage the environment and you destroy ecosystems, it never returns to what it was before,” Weir continues.

“It’s always going to be degraded. Trees and grass might grow again, but the ecosystem that has built up is going to be different, in a lot of cases.”

The real consequences of bombing industrial and residential areas

The Conflict and Environment Observatory (CEOBS), a non-profit organisation based in the UK, has been closely monitoring the situation in Ukraine and the impact of the Russian invasion on the environment.

Researchers have been trying to assess the situation on the ground through satellite pictures and eye witness testimonies, as most of the online monitoring stations have been removed.

“What we are most concerned about is the Russian strategy of bombarding urban areas, which have industrial sites close to where people live, work and where children play. This is very concerning because we’ve seen it in Chechnya, and this creates environmental health risks for people that are still there or when they return,” the organisation tells Euronews Green.

It is not just industrial plants that pose a risk to the environment and public health when damaged, many warehouses and distribution centres contain potentially hazardous substances. #Ukrainehttps://t.co/K4OpTjDDmB

“In Ukraine, the scale of the destruction that we are seeing… it is likely that we’ll see permanent pollution issues being caused as a result of this conflict. Some of them will be temporary like smoke and fires, but others will last for a while. Some will be rained out to the rivers and the soil.”

The destruction of entire cities, together with the bombardment of industrial sites across Ukraine, may have the same impact on air quality at a much larger scale.

It is likely that we’ll see permanent pollution issues being caused as a result of this conflict.

The consequences of war in Ukraine are already visible, as the conflict has been ongoing in the Eastern provinces of the country since 2014. According to a recent report from Action on Armed Violence, cited by the UNEP, in Ukraine’s Donbas 36 mines have now flooded and are likely to have released methane gases and toxic heavy metals into local groundwater pools. This has the potential to pollute key water supplies.

The besieged city of Mariupol, where heavy fighting is currently held, is of major concern.

The city is home to two large iron and steelworks, and more than 50 other industrial entreprises, which could cause serious harm to the environment if they were damaged.

“Whatever is being fired, shells, rockets, missiles, all of them contain metals. Some are very persistent in the environment. When they blast, this stuff is being pulverised, and can it also be mixed in with the stuff that it’s hitting, whether that is an industrial site or a residential building.”

As Ukraine is a country with a large nuclear power system, the war poses even greater risks, according to the researchers of CEOBS.

“To us it was wild to see a fire fight next to a nuclear power plant. And while there was a lot of focus on nuclear reactors, people tend to ignore that there were thousands of spent fuel rods stored in the open air in pretty weak concrete gaskets.”

“And if the power plants get contaminated because the fuel storage area has been hit, where is your access to the plant to monitor and manage the activities?” Weir adds.

The true extent of the environmental damage of in Ukraine remains to be seen.

Previous conflicts, like the Russian war against Chechnya, left 30 per cent of Chechen territory contaminated and now “does not meet environmental conditions for life”, according to research by the Central Asia-Caucasus Institute & Silk Road Studies Program.

Almost half of its agricultural land is no longer arable due to the 20,000 tons of oil pollutants leaked into the ground since 1994.

Once the bombs become silent, that’s when restoring the environment turns into a greater challenge.

But once the bombs become silent, that’s when restoring the environment turns into a greater challenge, Weir tells Euronews Green. “Environment remediation is very expensive and often technically quite challenging, and we find that often after conflicts, this isn’t done. There is no capacity, or money, or resources to remediate the environment.”

Regardless of the direct impact of carbon emissions, it’s the shift in certain nations’ priorities around economic growth and reconstruction, as well as a breach in mutual trust, that poses the biggest risk in the fight against climate change.

“Something that has a long-term impact is the collapse of environmental governance.”

When conflict is happening, national, regional or local governments are very distracted. Green projects are halted, activists and researchers may have to flee “and these effects can last for a very long time”, he adds.

“Tomorrow and next week, space in the media will compete between speaking on novel findings and measures to adapt and build a climate-resilient future - and news on war against Ukraine. But it was not our choice,” Head of the Ukrainian delegation to the Intergovernmental Panel on Climate Change (IPCC), Svetlana Krakovska, said in a statement.

“Let me assure you that this human-induced climate crisis and the war against Ukraine have direct connections and the same roots,” she concluded.