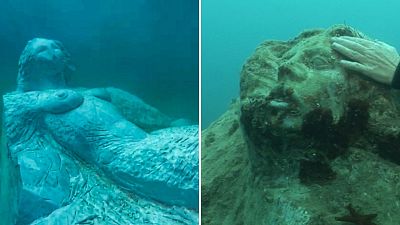 Italian fisherman Paolo Fanciulli heads out daily along the wild expanse of the Maremma coastline in search of mullet and sea bream. He has been fishing these waters off Tuscany for over 40 years but, until recently, was forced to share them with a dangerous counterpart.

In the late 1980s, Fanciulli began to notice the unmistakable signs of illegal trawling. The seabed was becoming barren and fish stocks were rapidly depleting. With livelihoods at stake, Fanciulli felt compelled to act.

And so, in 2013, the underwater 'House of Fish' sculpture park was born. His local bay is now safe, but he has already set his sights further up the coastline which remains unprotected.

Sculptures beneath the sea

Along a stretch of Tuscan coastline near the town of Talamone, mammoth stone sculptures now dot the seabed. Made of Carrara marble, the same material that Renaissance master Michelangelo favoured, the artworks are already thickly coated with algae.

Among the sculptures is the monumental head of the Weeping Guardian by British artist Emily Young and the Ittico Obelisco by Massimo Catalani, looking like the remnant of an ancient submerged city.

If the sea dies, so does the fisherman. You can’t just take, you have to give too.

A total of 39 sculptures now rest on the sea bed, and 12 more are currently being worked on.

Sunken statues have been used in various coastal locations by environmentalists or authorities attempting to revive a dwindling marine population. But the non-profit association Casa dei Pesci, or House of Fish, was the impassioned project of one fisherman, determined to protect a coastline from devastating illegal fishing.

While Fanciulli and the other local fishermen's practices are necessarily sustainable - if they damage the ecosystem they lose their source of income - the bottom trawlers were indiscriminately destroying the bay.

“They were devastating the sea and my way of life,” Fanciulli tells Euronews. “If the sea dies, so does the fisherman. You can’t just take, you have to give too.”

Destruction from the bottom up

The trawlers use heavy weighted nets that they drag along the seafloor, tearing away plant and marine life as they go. They get a hefty catch, but casually strip the seabed in the process. “It’s like a hunter wanting to catch a wild boar and burning down the forest to get it,” says Fanciulli.

Here on the Maremma coast, this scraping of the seabed results in the destruction of the Posidonia, also known as Neptune grass, that forms in vast underwater meadows.

“The life of the sea begins with the Posidonia,” explains Fanciulli. This seagrass functions as a nursery for the area’s marine life. Creatures like lobsters and sea bream lay their eggs in it.

Posidonia is a powerful carbon sink, absorbing 15 times more CO2 annually than an equivalent plot of the Amazon rainforest.

It is also a powerful carbon sink, absorbing 15 times more CO2 annually than an equivalent plot of the Amazon rainforest.

As such, bottom trawling is banned within three nautical miles of the Italian coast but, with such profitable catches to be had, it continues on regardless. It may be that, due to the country’s vast coastline, the police are unable to control its entirety.

But Fanciulli is far more sceptical and convinced of mafia involvement. Either way, it has left many areas like the Maremma coastline at the mercy of the trawlers.

Fanciulli began protesting and making TV appearances in the late 80s to fight against the bottom trawlers near his hometown of Talamone. It made him into something of a local hero (known as Paolo the Fisherman) but it also earned him enemies, he says, and saw him blacklisted from mafia-controlled fish markets.

Ilaria de Bernardis, a journalist who has co-authored a book about Fanciulli, says, “This period seems like a spy story, he risked his life against the illegal trawlers.” In those early days, he was one lone fisherman against a much more powerful enemy, explains de Bernardis.

However, in 2006, Fanciulli decided to collaborate with local authorities to drop concrete bollards in the sea. They function as a deterrent to illegal trawling because they snag the nets. If the trawlers don’t release the nets, their boats can sink.

The blocks were too dispersed to trap the fishers' nets, but they gave Fanciulli an idea: “I decided to use art to stop them instead.” As de Bernardis puts it, “He wanted to defend beauty with beauty.”

Fanciulli contacted Franco Barattini, president of the quarry where Michelangelo sourced his marble, to request a few blocks. Barattini donated 100. Almost half of those blocks have now been carved into sculptures and lowered onto the seabed.

Fanciulli’s other-worldly sculpture park is serving its primary purpose. Illegal trawling has been completely halted in the area. The artworks have also encouraged marine life back to the waters.

With the Posidonia regrowing, fish numbers are rising again. Lobsters have returned as well as turtles. The underwater museum is also open to visitors who can join a scuba diving or snorkelling tour or organise their own.

“With the House of Fish, we have created a cultural attraction, we are safeguarding the sea and we are helping repopulation,” says Fanciulli.

The remainder of the 15-ton marble blocks will likely be enough for several more years of the project as transportation and placement in the sea is a lengthy and costly process. But, in the meantime, Fanciulli also has a dream to include replicas of Roman amphorae in the sculpture park.

“I want to put 50 in my museum that will become a natural home for octopus,” he says.

With illegal trawling still rife in areas further up the coastline, Fanciulli’s intention is to keep extending the House of Fish. “Man is still destroying the seas,” he says. “And my mission continues.”