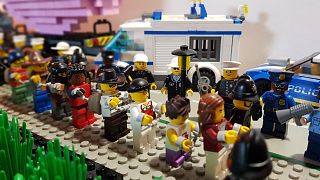 Woody's first project was inspired by the iconic bink boat that Extinction Rebellion placed in Oxford Circus, London during a major protest in 2019. He bought some secondhand Lego online, built the boat and showed it to friends and fellow activists.

“Everyone kind of fell in love with it and they were like, ‘Oh, what are you going to do next?!’”

The British artivist started to recreate more scenes including the actions against HS2 in the UK and protests outside of Coca Cola headquarters.

Growing from a lockdown joke

Woody was inspired by the story of a Russian town where protest was banned. The residents there found a loophole - figuring that, while people were not allowed to take part, toys could because they were not citizens of the country.

An activist's work is rarely fun but he says the brick scenes have captured people’s imagination - and made them laugh amid the madness of the whole climate crisis.

It was a unique form of environmental action and what started as a lockdown joke grew with the artist's images gaining global recognition during COP26.

“For the Climate Summit in Glasgow last year, the Lego rebels did an action which wasn't based on a real-life action like their other actions but it was based on real-life activism.”

“It was against Shell to stop the Cambo oil field in the North Sea.”

By the end of the climate conference, millions of people from all over the world had seen the images on social media and people were messaging Woody from Australia about the Lego Rebels. Three weeks later Shell pulled out of the Cambo oil field.

“I’m not for one minute suggesting that it’s because of the Lego Rebellion but it brings me back to the little strapline I gave the project: no one is too small to make a difference.”

There’s been some backlash with people on social media questioning why he chooses to use plastic toys. But, Woody says, the tiny Lego people are a lot like us.

“Plastic is a derivative of fossil fuels. You know, it's a product of the processing of oil. So the concept of an existential climate crisis is even harder for the Lego rebels.”

“There's an important allegory here that was not an intention, but it's something that I've tried to develop with the narrative of the stories as they go on,” he explains.

All of the bricks used for the actions are either bought secondhand or donated. Recent sustainability efforts mean that some of the pieces being used in the Lego scenes are now being made from a plastic produced using sustainably sourced sugarcane rather than fossil fuels.

Woody adds that, unlike the plastic bottles that are the target of the Lego Rebel’s Coca Cola action, the toy building blocks are used over and over again. Some of the secondhand bricks he has bought online date back to the 1960s and 70s.

“The thing about Lego is, if there's a spectrum of single-use and multi-use, Lego is about as far removed from a Coca Cola bottle as you can be.”

One of Woody’s installations is currently at the Climate Emergency Centre in Guildford, UK. The massive three by three-metre piece is placed in the window, drawing people off the streets.

He says it's fascinating to spend time at the centre, watching the interactions between children and adults. Kids are drawn in by the Lego and their parents want to explain to them the big issues the piece represents.

“It's actually become a serious kind of outreach tool as well.”

There’s humour to it, he says, that allows people to process the difficult reality of climate change. Many of Extinction Rebellion’s protests, like the pink boat, have an element of the absurd to them and Woody believes he is echoing that with the Lego Rebels.

“These are real climate issues that we're dealing with. What I've discovered is that doing this amplifies these issues to those outside of bubbles.”