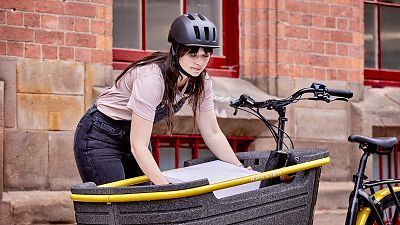 But giving up your car for good is a hard decision. Especially if you have children to take to school, a business to run or even just shopping to carry home from the supermarket. An ordinary bike probably won't cut it.

A cargo bike, however, could be the answer.

It isn’t just London either. The 100,000 cargo bikes introduced to Europe between 2018 and 2020 are estimated to save the same amount of CO2 every month as would be emitted by 24,000 people flying from London to New York, the report says.

More than half of all freight journeys in cities could be carried out via cargo bike according to recent estimates. As the number of home deliveries soars, it could be the solution to keeping our congestion and pollution in our metropolitan centres to a minimum.

In London, for example, the average speed of traffic is just over 14 kmp/h, so you can easily keep up with one of these electric cargo bikes.

While there has been an uptick in bike use in the country in recent years - in part thanks to the pandemic. ut many of us still only ride for pleasure rather than utility. The key to getting us using our bikes is probably better infrastructure.

Pop-up cycle lanes, new routes and fitness campaigns led to an additional £1 billion in bike sales in 2020. Experts have started to look into e-bikes specifically as a way of helping us to return to work without risking our health and increasing our overall mobility.

The biggest impact, they found, could actually be found in those areas without good public transport links.