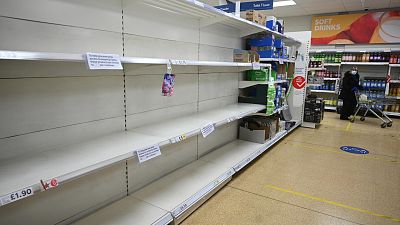 Energy prices have soared in Europe and industry experts are now warning that it could lead to shortages of items that require a lot of energy to produce - including toilet paper.

We could be about to return to the early days of the Covid pandemic when people stockpiled toilet paper amidst rumours it was about to run out completely.

But why does toilet paper often get caught up in crises?

Creating this bathroom essential is incredibly energy-intensive. Manufacturing one tonne of paper products requires an average of 11.5 gigajoules of energy. That’s enough to make around 11,500 pots of coffee.

Since the Russian invasion of Ukraine began, the price of natural gas has risen rapidly to reach almost €120 per megawatt-hour. It is the highest it has been in the past year and Europe relies heavily on this fossil fuel for its energy.

As the third biggest industrial energy consumer in the EU, the paper industry is already being impacted by the rising cost of electricity.

In Italy, paper firms have halted production due to the energy shock caused by the Ukraine war. The crisis has hit the entire chain of production from toilet paper to packing material and even recycling.

“If last December Italian paper mills were paying five times more for natural gas, with which they produce electricity to run their plants,” explains Lorenzo Poli, chief of Assocarta, the trade group for the Italian paper industry. “These days the cost has increased tenfold, with peaks of fifteen times more.”

The pandemic did not stop us, an energy shock is succeeding following the current crisis situation between Ukraine and Russia.

He adds that paper mills resisted the rise in energy prices late last year, even producing at a loss, but now more and more paper factories are coming to a halt.

“The pandemic did not stop us, an energy shock is succeeding following the current crisis situation between Ukraine and Russia,” says Poli.

For those that have managed to remain open, energy prices are set to increase yet again with Russia threatening to cut off gas supplies to Europe.

The EU is already looking to cut demand for Russian gas by two thirds before the end of the year and plans to make Europe independent from these energy sources well before 2030.

It is time to “tackle our vulnerabilities and rapidly become more independent in our energy choices” according to Frans Timmermans, executive vice-president for the European Green Deal.

“Let's dash into renewable energy at lightning speed,” he said on Tuesday as the EU announced its decision to move away from Russian fossil fuels.

“Renewables are a cheap, clean, and potentially endless source of energy and instead of funding the fossil fuel industry elsewhere, they create jobs here.”

He added that the war in Ukraine had demonstrated the urgency of accelerating the clean energy transition.

Paper manufacturers have welcomed the decision but are still worried about how energy-intensive industries like theirs will cope in the short term.