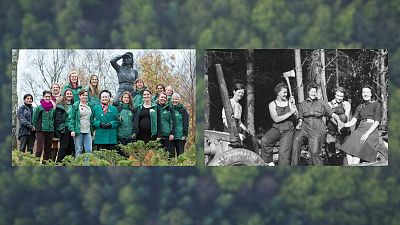 If you go down to the woods today, you're sure of a big surprise. They probably won't be full of picnicking teddy bears, but spotting women wielding axes, loppers and saws is more likely.

With the emphasis firmly on planting saplings for the Queen's platinum jubilee, I spent a morning with the Conservation Volunteers learning why thinning out trees so the whole forest can flourish is just as important - and why you don't need to be a burly bloke with a beard to fell firewood.

The community wood fuel days take place over the winter and come to a halt once nesting season begins.

They're a chance for would-be lumberjacks and jills to chop their own logs for the wood burner, while looking after the woodland on their doorstep.

Is forest-to-fire the new farm-to-fork?

It's a bit like the farm-to-fork initiative for food, but forest-to-fire instead.

An even mix of men and women gathered by a 13th-century manor house to collect hard hats and tools before heading to the copse that needed care.

After session leader Ben explained about tool safety and gave us a demonstration of how to make a gob cut - removing a wedge to dictate where the tree will fall - we got stuck in with bowsaws, loppers and pruning saws.

Having never cut timber before, it was hard work getting through the thin trunk of the silver birch that seemed to be struggling for light among its neighbours. And it was a bit sad seeing the freshly exposed trunk after our efforts, despite knowing that we were giving nature a helping hand in a manmade woodland that was only planted in the last two decades.

I doubt the woods would be where they are without the efforts of the rangers and the volunteers. The work is needed, even if it does attract occasional criticism from passers-by, cross that trees are being chopped down and carted off.

When woodland is created, the trees are planted too close together to drown out the brambles which would otherwise swamp the trees. After a number of years, the young trees need thinning, so that the healthiest have space to grow to full size. It allows woodland flowers to grow in the sunny spots created, as well as making space for new saplings to ensure the wood has a healthy diversity of tree ages and species.

The logs that we cut will need seasoning before they can be burnt - we've all heard of slow travel and slow food, and this is slow fuel, waiting months for the wood to be dry enough to use, instead of buying a bag that's ready for the burner from a firewood supplier.

It seems that more females than ever are taking up forestry.

The Forestry Commission's workforce is now 40 per cent women.

For Sue Anderson, community engagement manager at the National Forest Company, making sure that the woods are accessible to all and that schoolchildren in particular feel a sense of belonging among the trees is key.

She says: "We are trying to create equality and opportunity, so that it is not just the privileged who benefit from the National Forest.

"There's more people from more walks of life accessing the woodlands. More than 60 per cent of schools in the forest have outdoor learning on a regular basis and we have 60 community-led groups involved in managing the woodland. Some are very much male-dominated but many are more diverse."

Having come from an engineering background, the only woman on her degree course, she's no stranger to challenging gender stereotypes and hopes to see more women in the woods as the younger generations grow with and in the forest.

Helen Bralesford, 59, has learnt to use a chainsaw since she started volunteering with both the National Forest Company and the Woodland Trust.

She says: "I grew up in an era and place where women were still being told to take cookery, needlework, childcare and maybe, if they were clever, typing to become a secretary. I wasn't allowed to do woodwork and metalwork and part of me, when I heard about the wood fuel group, thought I'm going to fell a tree just because someone told me I couldn't.

"A lot of women are a bit tentative about getting in there with the heavy equipment. Chainsaws are scary things and they feel a bit frightened by them. But the industry level training I've received has been invaluable. I've got the confidence to pick up a spanner and do things at home, it's spilled over into other parts of my life."

With a forester grandfather and aunts who looked after land and worked in a sawmill, it seems a bit like Helen is going back to her roots.

Lumberjills of the Second World War

Of course, it's not the first time women have worked in the woods.

The Women's Timber Corps in the Second World War stepped in to replace men serving in the armed forces, with up to 13,000 females serving at its peak in 1943. After the war, there was little recognition of their work, or that of the Women's Land Army who kept the nation's farms going.

But in 2014, a statue of a lumberjill and a land girl was unveiled at the National Memorial Arboretum in Staffordshire.

After spending just two hours felling a couple of small trees with plenty of help, I feel awestruck by these tough women and the example they set.

Could the lumberjills of the past inspire women of the present to grow the forests of the future?