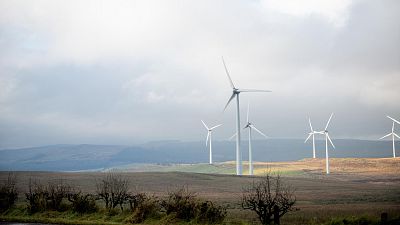 More than half of Ireland’s electricity was supplied by wind power in February.

According to a report from Wind Energy Ireland, it was the number one source of power throughout the month, achieving the highest ever share of demand it has ever had.

Noel Cunniffe, CEO of Wind Energy Ireland, said the results were welcome, showing the “ever-increasing importance of wind energy and renewables for the Irish energy sector.”

The report also highlighted a dramatic increase in energy prices between February 2021 and 2022. Europe is currently seeing a record-breaking surge in electricity costs that is being spurred on, in part, by a reliance on fossil fuels.

Natural gas and coal still supply around 35 per cent of Europe’s power and prices have soared by more than 450 per cent in less than a year.

The boom in wind power, however, saw wholesale electricity prices in Ireland drop significantly on the windiest days of the month - almost €100 cheaper per megawatt-hour.

Delighted to launch our first monthly #WindEnergy report - which you'll now get at the end of each month.

A great month to start as we set a NEW RECORD for share of demand met by wind.

Every month we will show the share of demand met by wind and its the impact on the prices. pic.twitter.com/NKfpOBgShW

“The fact that wholesale prices fall when wind energy production is high shows that wind energy will play an increasingly important role in the coming months, mitigating the worst effects of the predicted price increases for consumers due to spiralling fossil fuel import prices,” says Cunniffe.

“It is vital that we bring through new wind farms as quickly as possible in the coming months and years to ensure we can consistently achieve figures like this if we are to meet the targets set in the Climate Action Plan.”

Earlier this month, the Wind Energy Ireland CEO warned that wind energy targets are being held back by planning delays. Cunniffe said that the country’s Climate Action Plan was at “serious risk.”

“We must cut our carbon emissions by 30 million tonnes per annum by 2030. We cannot – I say again – we cannot achieve this without 5,000 megawatts of offshore wind energy connected to the system.”

He added that the problem was not a lack of projects, investment or construction with over 20,000 megawatts of capacity currently under development off Ireland’s coast.