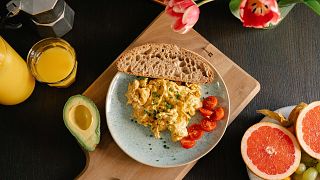 Vegan eggs are coming to a supermarket near you. The final frontier in plant-based protein, the vegan egg has proven to be much trickier than making plant-based milk or meat.

But with a whopping 1.3 trillion eggs consumed worldwide every year, 110 billion of these in Europe alone, the market is more than ready for an alt-egg option.

“We live in a world where burgers are produced without beef and milk comes without cows, so there must be ways of taking the chicken out of the egg equation,” says Tanja Bogumil, founder of food tech start-up Perfeggt which has just produced its first egg alternative.

One of the best sources of animal protein out there, the egg replica has been difficult to master for food scientists, which is why plant-based milk and meat markets have been cracked much more quickly.

“Eggs are the champions league,” says Tanja, “unlike the burger, which only needs to come in a certain shape and taste great. Eggs are such special products, they are miraculous. They gel, they foam, they bind, they coagulate.

Eggs are such special products, they are miraculous. They gel, they foam, they bind, they coagulate.

This complexity means eggs are much harder to replicate than cow's milk or meat, which is why they've alt-eggs have been so much slower to the produce.

What are vegan eggs made of?

While vegans have been using aqua-faba (the water that comes in chickpea cans) as an egg alternative for decades, scientists have now taken the plant-based process much further. Vegan eggs currently on the market are made from legumes, vegetables and aquafaba, though most companies remain guarded about their exact recipes.

“When looking at the selection process of the best suited ingredients, it’s important to see the bigger picture, which is really how do we deconstruct and then reconstruct the respective functionalities of an egg,” continues Tanja.

“And how do we determine what kind of ingredient, what kind of plant based proteins are best suited to mimic this, without just loading the formulation with too many additives?”

Keeping the process clean and green is important if vegan eggs are going to survive on the mass market. If anything can be learned from plant-based milk, it’s that consumers will do their research.

While business is booming in the alternative milk sphere, both soy milk and almond milk have suffered bad press due to the questionable eco-credentials of their ingredients.

Tanja is determined not to fall into the same trap. “One of our goals has always been and will always be to cater towards this ambition of building a better version of an egg, and a more sustainable footprint,” she says.

“One major motivation was to definitely exclude soy because of its footprint and to focus on raw materials that can be grown locally. Like fava beans and peas for example that can be grown in European climates.”

What came first, the carton or the shell?

While chicken’s eggs come naturally pre-packed, vegan eggs seem to be taking several forms. French company Les Merveillœufs are working on a shell for their alt-egg, many companies are taking a different path.

“The majority of egg dishes are simply scrambled applications followed by baking applications. This first product is a liquid, ready-to-use egg replacement, it just works like a freshly battered egg, it can be cooked, it can be baked.”

According to market research company Meticulous Research, the plant-based alternatives market will be worth an estimated $74.2 billion (€67.9 billion) by 2027, but Tanja believes there’s plenty of room for everyone on the alt-egg scene.

“It will be really interesting to see how the entire category develops. We are seeing a rush at the moment, and this is great, honestly the more-the-merrier,” she told Euronews Green.

“The entire category is where milk was decades ago. And there’s so much room, this is never going to be a winner-takes-all market. We always say that every additional player helps in our overall mission. It’ll be really interesting to see what comes next in egg innovation.”

Perfeggt will initially launch in Germany, Austria and Switzerland, followed by the UK.