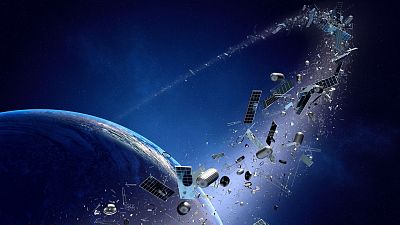 The moon is about to get walloped by three tons of space junk, a punch that will carve out a huge crater the size of several semi-trailer trucks.

The junk is expected to travel at 5,800 mph and the impact will be on Friday, 4 March.

Experts believe the waste, a leftover rocket, was sent into orbit by China several years ago, although China says that it doesn't belong to them.

The rocket will smash into the far side of the moon at 5,800 mph (9,300 kph), away from telescopes' prying eyes. It may take weeks, even months, to confirm the impact through satellite images.

No matter whose it is, scientists expect the object to carve out a hole 33 feet to 66 feet (10 to 20 metres) wide and to send moon dust flying hundreds of miles across the barren, pockmarked surface.

Low-orbiting space junk is relatively easy to track. Objects launching deeper into space are unlikely to hit anything and these far-flung pieces are usually soon forgotten, except by a handful of observers who enjoy playing celestial detective on the side.

We are now in an era where many countries and private companies are putting stuff in deep space, so it's time to start to keep track of it.

SpaceX originally took the rap for the upcoming lunar litter - after asteroid tracker Bill Gray identified the collision course in January. He corrected himself a month later, saying the "mystery" object was not a SpaceX Falcon rocket upper stage from the 2015 launch of a deep space climate observatory for NASA.

Gray said, instead, it was likely the third stage of a Chinese rocket that sent a test sample capsule to the moon and back in 2014.  As a mathematician and physicist, he says he is confident now that it's China's rocket.

"I've become a little bit more cautious of such matters," he said. "But I really just don't see any way it could be anything else."

Has waste ever hit the moon before?

The moon already bears countless craters, ranging up to 1,600 miles (2,500 kilometres). With little to no real atmosphere, the moon is defenceless against the constant barrage of meteors and asteroids, and the occasional incoming spacecraft, including a few intentionally crashed for science's sake.

With no weather, there's no erosion and so impact craters last forever.

China has a lunar lander on the moon's far side, but it will be too far away to detect Friday's impact just north of the equator. NASA's Lunar Reconnaissance Orbiter will also be out of range. It's unlikely India's moon-orbiting Chandrayaan-2 will be passing by then, either.

With little to no real atmosphere, the moon is defenceless against meteors and asteroids, and the occasional incoming spacecraft.

"I had been hoping for something (significant) to hit the moon for a long time. Ideally, it would have hit on the near side of the moon at some point where we could actually see it," Gray said.

"It's not a SpaceX problem, nor is it a China problem. Nobody is particularly careful about what they do with junk at this sort of orbit," he added.

Tracking deep space mission leftovers like this is hard, according to McDowell. The moon's gravity can alter an object's path during flybys, creating uncertainty. And there's no readily available database, McDowell noted, aside from the ones "cobbled together" by himself, Gray and a couple others.

"We are now in an era where many countries and private companies are putting stuff in deep space, so it's time to start to keep track of it," McDowell said. "Right now there's no one, just a few fans in their spare time."

Is space junk bad for the environment on planet Earth?

At this moment, there are roughly 2,000 active satellites orbiting Earth, as well as another 3,000 that are defunct, simply floating out in space, waiting to eventually re-enter the atmosphere.

A proportion of the space junk in low Earth orbit will gradually lose altitude and burn up in Earth's atmosphere - which means it's safe.

But larger debris can occasionally impact with Earth and have detrimental effects on the environment.

Larger debris can occasionally impact with Earth and have detrimental effects on the environment.

For instance, debris from Russian Proton rockets, launched from the Baikonur cosmodrome in Kazakhstan, today litters the Altai region of eastern Siberia. This includes junk from old fuel tanks containing highly toxic fuel residue, a carcinogen which is harmful to plants and animals.

While efforts are made to contain fallout from launches within a specified area, it is extremely difficult to achieve.

Another threat space junk poses is to our weather systems, indirectly. The density of the junk may become so great that it could hinder our ability to use weather satellites, meaning we wouldn't be able to monitor weather changes caused by pollution and carbon emissions. The US, Russia, Japan, France and the European Space Agency currently have issued orbital debris mitigation guidelines to tackle this issue.