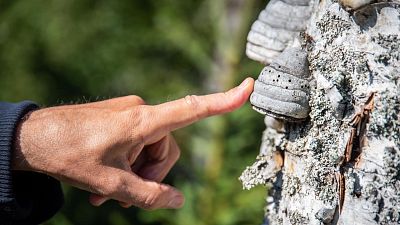 Cut down trees are always a sad sight but the Finnish practice of Tekopökkelö shows a different kind of respect for the forest.

These ‘biodiversity stumps’ are remnants of cut down trees left by loggers for nature to take over. Leaving just two to four metres of wood behind creates new possibilities for insects and birds.

While some might think that these high stumps are ugly, they provide a wealth of diverse conditions that help species to survive.

The practice is a kind of retention forestry - a widespread way of preserving some structures and organisms, like live and dead trees, while the rest of the land is cleared.

Metsä Group, the biggest buyer of wood in Finland, has been encouraging the practice among forest owners since 2016 - and a study from last year has already shown some promising results.

"A biodiversity stump is a tree trunk that has been cut at a height of a few metres during felling” explains Vesa Junnikkala, Metsä Group's director of sustainability.

“We make biodiversity stumps during felling to increase the amount of vertical decaying wood in the forest, which is important for many forest species.”

Currently, there is little published research on how these stumps contribute to the biodiversity of Finland’s forests. This is why the wood company decided to commission research on exactly what impact they were having on this ecosystem.

Compared to life on regular logging stumps, researchers noted that a third of the species in Tekopökkelö were found nowhere else in the forest - illustrating the haven they provide.

Metsä Group started to leave two high biodiversity stumps per hectare in 2016, doubling to four in 2020. This is done with the voluntary buy-in of forest owners, most of whom are keen to safeguard habitats, it said.

It is little surprise when these biodiversity riches can be obtained at only around €1’s loss per hectare to forest owners.

"It's worth the effort to make biodiversity stumps, because they increase the number of species dependent on decaying wood in the forest.

A high stump begins to decay in a few years, at which point woodpeckers and tits can start making nesting holes in it. Around one to four pairs of nesting birds can be found in a typical hectare of Finnish forest and Metsä says that two high stumps provide a good amount of extra spots to hole up in.

Four previously endangered beetle species were also uncovered in Tekopökkelö during the 2021 study.

There is life in dead wood, says the UK’s Woodland Trust. Past research has found 500 arthropods, from mites to millipedes, per litre of wood from dead branches, and an average density of 2,500 creepy crawlies per kilogram of ‘wood mould’ - the loose, soily wood that accumulates in the hollows of branches and stumps.

Even earthworms have been found metres up on a decaying stump.

“High stumps have often been called ugly and unnecessary,” says Metsä. But they provide us with decaying stumps that do not usually appear in forests as a result of windfall.

“The humidity of a decaying stump varies at different heights, thereby providing the species living in the dead tree with very diverse conditions.”