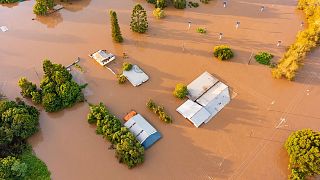 Water floods streets and houses in Maryborough, Australia, Monday, Feb. 28, 2022.   -   Copyright  AP Photo
The opinions expressed in this article are those of the author and do not represent in any way the editorial position of Euronews.
By Morgan Phillips  •  Updated: 01/03/2022

Dr. Morgan Phillips is the UK Co-Director of The Glacier Trust and author of ‘Great Adaptations - In the shadow of a climate crisis’. Here he gives us his take on the latest IPCC report.

A full eight years have passed since the IPCC’s fifth assessment report on climate change impacts, adaptation, and vulnerability. A lot of ‘climate action’ has happened in the intervening years, but the headlines emerging from the release, today, of the IPCC’s sixth report stress again that the action being taken is not even close to being adequate.

The 3,675 page report is the result of a voluntary and collective effort by 330 scientists and academics and draws on the work of thousands more. It is a truly global effort and a very timely reminder of the cooperative and collaborative power of the human species.

The all-important ‘Summary for Policymakers’ was finalised on Saturday and released today.

It has been meticulously approved by national Government officials from all over the world. They do not appear to have watered much down; it is a very sobering read.

The IPCC, once again, is telling us a story of impacts that are heavy and worse than previously expected. They are warning of a chronic lack of investment in adaptation, but also the limits of adaptation. And they are highlighting specific and generic vulnerabilities that climate change is exposing and exacerbating.

Today and tomorrow, news and social media feeds will be full of calls to double down on climate action.

Today and tomorrow, news and social media feeds will be full of calls to double down on climate action.

One message will drown out all others: the world must – rapidly and urgently – invest in renewable energy, phase out (not down) fossil fuels, and get on a credible pathway to ‘Net Zero’ emissions.

It’s the path we take that matters

It is a well-rehearsed message and one that gets listened to, but not heard. The campaign group Zero Hour have pointed this out brilliantly. In their short viral video they emphasise a key point that so often gets lost: “it’s not when we reach #NetZero, it’s the path we take that matters”.

According to the IPCC, the path we need to be on is concave, with deep cuts in carbon emissions in the near term:

The path the UK is on – and the UK is doing better than most – is, however, disastrously convex. It is a pathway that goes around the problem:

By delaying the making of deep cuts until the 2040s, the UK Government is taking a huge gamble on the power of future carbon removal technology and the expansion of renewable energy capacity. However, even if these technologies do emerge, this pathway commits the UK to emitting twice as much CO2 compared to the safer, concave path.

That is a lot of greenhouse gas to bestow on our children and grandchildren. If world leaders are serious about avoiding climate breakdown, the convex pathway is not a credible way to do it.

If world leaders are serious about avoiding climate breakdown, the convex pathway is not a credible way to do it.

Today’s IPCC report does nothing to assure us that temperature rises are slowing down, or that impacts will be benign. 1.5C of warming looks almost inevitable. This means that the planet will soon experience climate change impacts that are “irreversible”.

The stark reality is that today’s socioeconomic system is incompatible with climate stability.

Efforts to tackle climate change, and to prevent it from causing catastrophic loss and damage, have failed. If the world persists with neoliberal consumer capitalism, the failure is going to get deeper and deeper. Eventually, capitalism will collapse bringing Western civilisation down with it.

The solution, sadly, is not to switch to a ‘green’ version of capitalism. After at least 30 years of trying, the convex pathway is the best route to Net Zero that green capitalism has come up with.

It is clearly not sufficient; going around the problem gets us nowhere. A far more radical approach is needed.

At this morning’s launch event, the IPCC’s chairperson, Dr. Hoesung Lee, concluded that the new report “emphasises the urgency of immediate and more ambitious action to address climate risks”. He warned us that “half measures are no longer an option.”

He is skirting around the issue, and he is unable to say that our efforts have failed, few people are. However, until a widespread willingness to admit that the capitalist way of solving the climate crisis is the half measure, and that it has failed, we are stuck with it – which is to say, we are stuck with climate breakdown.

For me, the reason people are too afraid to admit that efforts have failed is that alternatives to capitalism have not yet entered the collective imagination. Viable visions of different and better kinds of future are needed, they will give people an alternative paradigm to step into and the confidence to call green capitalism out for what it is – a half measure.

Alternative socioeconomic models are emerging. They are more compatible with climate and ecological stability. I have covered some in my latest book, 'Great Adaptations', and there are many more to be found in the social sciences.

The third part of the IPCC’s sixth assessment report will be published in April. It is the labour of working group 3 and looks at strategies for cutting carbon emissions. It is high time it majored on post-capitalist, post-consumerist, and post-growth visions of the future and how a shift to them might make near-term deep cuts possible.