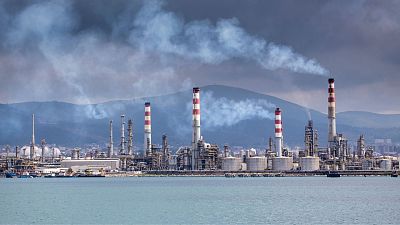 British bank NatWest cut lending to clients in the oil and gas sector by 21 per cent in 2021 and aims to limit it even further as part of efforts to decarbonise its loan book and reach net-zero emissions.

Financial firms around the world are increasingly committing to the net-zero target in the fight against climate change, although most have yet to put firm plans in place, particularly over the shorter-term.

The figures were announced in the first update by NatWest. The bank warned in 2020 that it planned to cut off financing for larger oil and gas companies if they failed to have a credible plan to transition to net-zero.

NatWest said its lending to oil and gas companies fell a fifth to £3.25 billion (€3.9 billion) last year, and total lending to the sector now makes up just 0.7 per cent of its loan book.

Total lending to the sector now makes up just 0.7% of its loan book.

“Finance is a key enabler in the drive to Net Zero and we are acting to ensure that we are helping to end the most harmful activity while championing climate solutions and accelerating the speed of transition to the zero-carbon economy," Chief Executive Alison Rose said in a statement.

The bank said it was further restricting lending, and from 1 January would only lend to upstream oil and gas companies where the majority of their financed assets are UK-based, and where the company reports its emissions by the end of 2023.

Large oil and gas companies, with more than 15% of their activities in thermal or lignite coal, did not have a good enough climate transition plan.

A review of large oil and gas companies and those with more than 15 per cent of their activities in thermal or lignite coal, found many did not have a good enough climate transition plan.

The activities also included mining, power generation and trading, which together account for £1.4 billion (€1.68 billion) in financing.