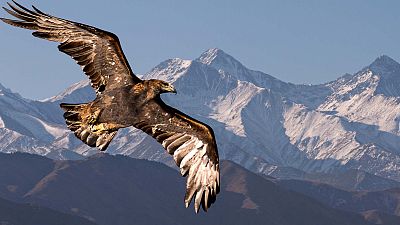 Bald and golden eagles are being decimated by frequent and widespread lead poisoning from hunters' guns across the US, a new study shows.

Examining the carcasses of 1,210 dead eagles across 38 US states over eight years, scientists from the US Geological Survey, Conservation Science Global (USGS) have found that half of the birds presented high levels of lead - a poison they had likely ingested by consuming contaminated deer.

It's the first study to show the consequences of lead poisoning on predatory birds on such a wide scale.

According to the USGS scientists behind the study, the repeated exposure to lead is hindering the population growth of both bald and golden eagles, which are protected species in the US and just recently made a comeback from the brink of extinction.

In the twentieth century, the two species were disappearing due to the widespread use of the insecticide dichlorodiphenyltrichloroethane, which was later banned.

The two species significantly increased their numbers in recent decades. While bald eagles are endemic in the US and their population is still growing yearly by an average of 10 per cent, lead poisoning threatens to tip the number of golden eagles in the country towards a dramatic decline.

A study by researchers at the Department of Public and Ecosystem Health at Cornell University in New York has estimated that ingesting hunters' bullets left in wildlife have stunted the birds' population growth by 6.3 per cent for males and 4.3 for females.

Researchers are now urging hunters to switch from lead to copper bullets.

Why are hunters still using lead in the US?

Lead poisoning is no longer a problem for eagles in the UK, where their population is now thriving thanks to rewilding efforts, says Roy Dennis, a Scottish eagle expert and conservationist.

Dennis is a big fan of eagles and is devoted to the protection of these predatory birds: he recently successfully restored the population of white-tailed eagles in England, where the species had been extinct for 240 years.

He said hunters in the UK have overwhelmingly gone lead-free for their ammunition, choosing copper over the poisonous material as a substance that doesn’t shatter into wildlife when fired.

He said there are still small groups of hunters who use lead, but they represent a minor threat.

The situation is very similar in Europe. Germany, Denmark and Sweden have a total ban on lead ammunition. In 2020, the European Union took the historic decision to ban lead bullets for hunting in wetlands across the bloc.

But lead bullets are still very much a thing in the US.

In the last decade, the number of studies providing evidence that lead poisoning presents a risk for both wildlife and humans has multiplied, and so have the calls to get a ban on lead ammunition in the US.

In 2017, in the final days of President Barack Obama's second administration, outgoing US Fish and Wildlife Director Dan Ashe banned the use of lead ammunition in national wildlife protection areas. But the ban was short-lived, as it was soon overturned during the Trump administration.

Despite many being aware of the negative impact of lead bullets, there's resistance among the American hunting community to a general ban on lead ammunition.

Hunters appear to be mostly concerned about the higher cost of copper bullets over lead ones and the fear that lead-free ammunition won't perform as well.

And - you might not be surprised - it's a matter of principles: hunters believe they're defending the Second Amendment from what they think would be an attempt to curb the rights this grants to American citizens.