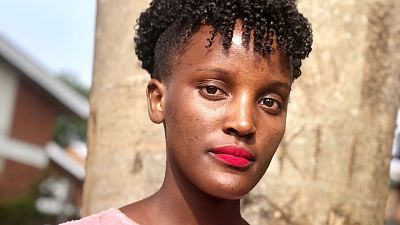 Ugandan climate justice activist   -   Copyright  Vanessa Nakate   -
The opinions expressed in this article are those of the author and do not represent in any way the editorial position of Euronews.
By Vanessa Nakate  •  Updated: 17/02/2022

Vanessa Nakate is a climate justice activist from Kampala, Uganda. She founded the Rise Up Movement Africa and campaigns internationally on climate change and its impacts. Here she gives us her take on the disappointing outcomes from COP26 and why we need to keep global average temperature below 1.5º C.

A few months ago, I had the opportunity to speak in a high-level plenary to world leaders at COP26 in Glasgow.

It was towards the end of the conference when leaders were congratulating themselves for all the progress that had been made — they were telling the outside world that they had kept the prospect of limiting global warming to 1.5C "alive".

I gave them a simple message – that we, the people, felt betrayed by the broken promises they’d made in the past and that we didn’t believe they would keep the new promises they were making. Then I asked them to prove us wrong.

That was only three months ago. What have European and African leaders done since then?

The UK’s COP President Alok Sharma is demanding that low-income countries, who have done relatively little to create the climate crisis, raise their levels of climate action ambition.

Yet, just weeks after his government called on other countries to “consign coal to history”, Prime Minister Boris Johnson gave permission to massively expand a coal mine in Wales.

A few weeks later, the UK announced it was giving a green light to a new oil and gas field in the North Sea - and considering six more fossil fuel developments.

Not to be outdone, the EU decided that natural gas should be considered “sustainable" as part of its new Taxonomy — allowing dirty gas to receive investments that should be going into clean energy.

But this hypocrisy is not unique to European leaders.

African government leaders, foreign banks and Total — the European oil company — have announced a final investment decision on a massive new oil pipeline that will rip through the East African region, including my country, Uganda.

Many in East Africa believe that oil is an answer to their problems, that it will drive prosperity. But this is a foreign owned oil pipeline - most of the profits will be taken back to rich countries, while environmental destruction is felt here.

Many in East Africa believe that oil is an answer to their problems.

These fossil fuel companies are starting to lose their ‘social licence’ to operate in their home countries, due to a backlash, so they are pushing operations into Africa instead.

As the world starts to ramp up the transition, these infrastructure projects will, at some point, become stranded assets. The East African Crude Oil Pipeline will only land Africans with more debt - debt on top of the debt. African nations are already struggling to pay rich nations at crippling interest rates.

Big oil companies are making record profits. They say they need these profits to fund a shift into renewables, but less than 5 per cent of their total investment is going into clean energy. Billions of dollars in investment is going into more oil and gas exploration and new fields — even though the International Energy Association has made it very clear that any new fossil fuel development would put 1.5ºC out of reach.

And please remember that even if we were to keep global average temperature below 1.5ºC, that would still be disastrous for many countries in Africa. That kind of temperature increase would make what is already intolerable in parts of the African continent uninhabitable.

That kind of temperature increase would make what is already intolerable in parts of the African continent uninhabitable.

European and African leaders are meeting in Brussels tomorrow.

They need to take into account those who are already suffering from heat waves, droughts, floods, and storms; the thousands of species being driven to extinction; cultures that are being lost; forests that are burning - and the dirty air and water choking our populations on both continents.

They still have a chance to prove us wrong, but they are running out of time.

View: We need to listen to vulnerable nations about loss and damage