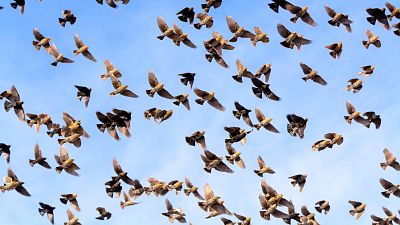 The mysterious deaths of hundreds of yellow-headed blackbirds has sparked uproar in the northwestern Mexican city of Chihuahua   -   Copyright  Getty Images   -
By Ben Anthony Horton  with Reuters Connect  •  Updated: 15/02/2022

Social media speculation is mounting after hundreds of yellow-headed blackbirds have been filmed falling to their deaths in the northern Mexican city of Chihuahua.

The footage from a security camera shows a flock of migratory birds plunging to the street from a great height. While many of the birds manage to fly away, subsequent footage reveals a grisly collection of carcasses scattered across the tarmac.

According to the local paper El Heraldo de Chihuahua, a veterinarian initially placed blame for the incident on high levels of pollution - driven by the use of wood-burning heaters, agrochemicals and cold weather in the area.

Another conspiracy theory suggested that electrocution from nearby power lines could be behind the phenomenon. There was even speculation that the installation of 5G technology could be to blame.

But experts now claim that it was most likely the movements of a predatory bird that caused the flock of blackbirds to plunge to their deaths.

The yellow and black fowl had been wintering in Mexico after arriving in the country from Canada. Adults of the species are preyed upon by the Northern Harrier - a predator common in Mexico during the colder winter months.

Much like starlings, these birds are often seen travelling in large flocks, making incidents such as these more likely during their annual migration.

Watch the video above to see the mysterious incident for yourself.

Birds losing habitat in the Netherlands due to rising sea levels