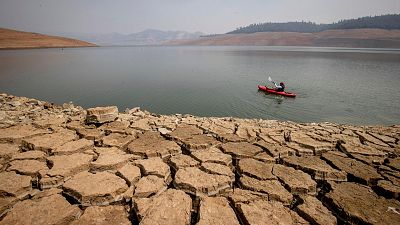 California and other western US states have experienced severe water shortages over the last decade. Some communities have even been forced to import bottled water for drinking.

Now scientists say that the ‘megadrought’ which has enveloped the western US for 20 years is the worst to hit the region in at least 1,200 years. Low rainfall and high temperatures in 2021 mean that it is particularly dry with 95 per cent of these states in drought conditions as of 10 February.

Two of North America’s largest reservoirs, Lake Mead and Lake Powell on the Colorado River, reached their lowest recorded levels in more than a century last summer. They provide water for some of the largest cities in the US including Los Angeles and Las Vegas.

The research also revealed that there is a 75 per cent chance that the dry spell could continue until 2030.

Lead author of the study Park Williams explains that, with weather conditions set to remain dry, it would take multiple years of wet conditions to remedy the problem.

“It's extremely unlikely that this drought can be ended in one wet year,” the geographer from the University of California, Los Angeles says.

Global warming caused by humans is making the problem worse

According to the experts, human-caused climate change accounts for more than 40 per cent of the dry spell’s intensity since 2000.

While computer models have shown that it would still be dry even without climate change, the problem would not be as long-lasting or widespread. Increasing greenhouse gases warm the world leading to more evaporation and disrupting weather patterns.

“Without climate change, the past 22 years would have probably still been the driest period in 300 years,” Williams says.

Increasing global temperatures lead to more evaporation that dries out the soil and vegetation. Between 2000 and 2021, temperatures in the region were nearly one degree higher than averages from the previous 50 years.

States like California aren’t the only parts of the world seeing the drying effects of global warming either. Up to three billion people could experience chronic water scarcity from drought if the world warms by 2C above pre-industrial levels, according to a draft version of the IPCC’s upcoming report on climate impacts seen by AFP.