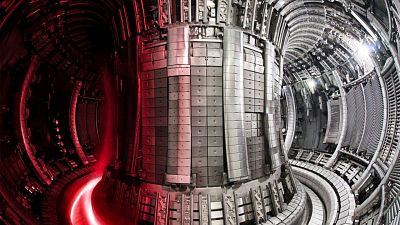 Scientists have made a major breakthrough towards practical nuclear fusion bringing us closer than ever to ultra-low carbon energy.

The team, from the Joint European Torus (JET) in Oxford, managed to generate 59 megajoules of energy through nuclear fusion. This is more than double the previous record set in 1997, according to the UK Atomic Energy Authority (UKAEA).

The results are good news for advocates of nuclear energy as a clean alternative to fossil fuels.

"As pressures mount to address the effects of climate change through decarbonising energy production, this success is a major step forward on fusion’s roadmap as a safe, efficient, low carbon means of tackling the global energy crisis," UKAEA said in a statement.

"Record results announced today are the clearest demonstration worldwide of the potential for fusion energy to deliver safe and sustainable low-carbon energy."

The CEO of UKAEA, Ian Chapman, says the results are "landmark" and will bring us "a huge step closer" to virtually emissions-free energy.

“It’s clear we must make significant changes to address the effects of climate change, and fusion offers so much potential," Chapman says.

"We’re building the knowledge and developing the new technology required to deliver a low carbon, sustainable source of baseload energy that helps protect the planet for future generations.

What is the difference between nuclear fission and nuclear fusion?

In the simplest terms, both fission and fusion produce energy from atoms.

Nuclear fission is the method currently used in power plants where uranium atoms from a heavy, unstable nucleus are split into two or more lighter nuclei.

Nuclear fusion is the other way around and involves fusing two light atoms into a larger one. This process aims to reproduce what happens in the heart of the sun.

Supporters of nuclear fusion consider it to be the energy of tomorrow. The process produces very little waste that is much less radioactive than that from a conventional nuclear power plant. Fusion also generates no greenhouse gases.

How soon could nuclear fusion be used to generate power?

Research is still in its very early stages and today's announcement only shows the possibility of creating fusion energy for five seconds - not enough for the process to be viable.

"If we can maintain the fusion for five seconds, we can do it for five minutes, and then for five hours" with more efficient machines in the future, estimates Tony Donne, of the EUROfusion consortium.

The data gathered in Oxford could also be useful for the ITER reactor under construction in the south of France, which is even more advanced than JET.

"Research and innovations being done here in the UK, together with our partners across Europe, are making fusion energy a reality," said parliamentary under-secretary for science George Freeman.

Is nuclear power really that green?

Many environmental groups have long been opposed to nuclear.

Friends of the Earth has been against nuclear pathways since the organisation was formed in 1971.

"We do not support the building of new nuclear power plants in the UK," says a paper from Friends of the Earth UK.

"The UK is blessed with huge resources of renewable energy such as offshore wind, tidal and solar. According to independent experts, these can provide all the energy we need.

"Renewable energy also does not have the problems of existing nuclear power technologies."

Greenpeace makes similar arguments about nuclear power, stating that though it is "touted as a solution to our energy problems, in reality it's complex and hugely expensive to build."

Both groups argue that the money invested in nuclear power, would be more efficiently spent on renewable sources.