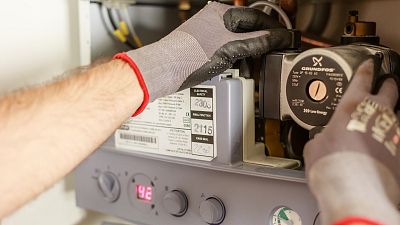 Britain needs to recruit and train an “army of plumbers” to install the clean technologies required to reach net-zero by 2050.

According to a new report from the Social Market Foundation (SMF), the UK will have to recruit a new generation of “climate heroes” to cut its dependence on fossil fuels like gas.

She explains that taking the gas out of home heating would help reduce that demand, protecting households from volatile pricing.

To move away from a reliance on fossil fuels, the UK government plans to replace gas boilers with up to 600,000 heat pumps a year by 2028. Prime Minister Boris Johnson says the initiative could support “thousands of green jobs.”

However, SMF warns that there is a critical skills shortage that could derail the UK’s net-zero transition. And the UK is already lagging behind most European countries when it comes to heat pump installation coming joint last for heat pump sales out of 21 nations. At the top of the ranking were Norway, Finland and Estonia.

“Plumbers and heat installers are going to be absolutely vital to the huge national effort to get the carbon out of our home heating,” Norman adds.

She says that right now plumbers and heat installers don’t have any clarity or incentives to get the training they need in order to install heat pumps. After interviewing industry leaders and workers, the report found that this lack of trained installers could jeopardise installation targets.

“We need a dramatic call from government to call up a generation of carbon heroes who will take the carbon out of our homes.”

Why do we need to lower carbon emissions from home heating?

Keeping homes warm makes up around 14 per cent of the UK’s total carbon emissions and 85 per cent of domestic heating is powered by gas. Around 29 million homes rely on this fossil fuel for their heat with CO2 emissions double those of the UK’s gas power stations.

Gas boilers are set to be phased out in the UK from 2035 and to reduce emissions, a huge push towards greener alternatives, like heat pumps, is needed if the country is to achieve its climate targets.

“Decarbonising British homes will play a vital role in delivering Net Zero, and as this report shows much will depend on the skills and effort of plumbers and heat installers,” says Conservative MP Peter Aldous.

The government is already in the process of launching the Boiler Upgrade Grant which could encourage homeowners to make the switch away from gas. But that won’t be possible if there aren’t enough skilled workers to install them.

“Making sure we have more workers with the skills needed to give Britain greener homes and cut our use of expensive gas must be a national priority,” Aldous adds.