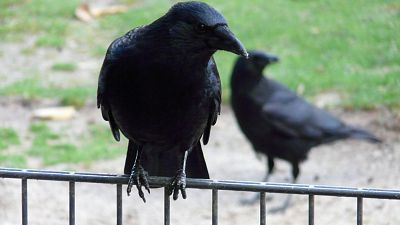 Crows in Sweden are being trained to pick up cigarette butts that are littering the streets.

In Södertälje near Stockholm, the birds are being recruited to help with this persistent waste problem. A device designed by startup Corvid Cleaning rewards crows with a small amount of food for every butt they bin. It provides positive reinforcement that encourages these intelligent birds to repeat the behaviour.

Crows can do jobs, share knowledge and even mourn their dead. Some studies suggest that they could be the smartest animals on the planet besides primates with a level of reasoning equal to a seven-year-old. They were chosen for the job precisely because of their intelligence, the man behind the innovative idea, Christian Gunther-Hanssen told Swedish news agency TT.

“They are easier to teach and there is also a higher chance of them learning from each other. At the same time, there’s a lower risk of them mistakenly eating any rubbish.”

He goes on to add that the wild birds are taking part in the trial on a “voluntary basis.”

The most prolific form of plastic pollution

The city of Södertälje alone spends roughly 20 million Swedish Kroner or €1.9 million on street cleaning every year. Günther-Hanssen believes training the crows could cut the cost of cigarette cleanup in the city by up to 75 per cent.

The estimated cost of picking up each butt is around 12 cents, he says that using the crows instead would reduce this to just 3 cents.

And it isn’t the first time crows have helped with a waste problem. In 2018, the Puy du Fou theme park in the west of France taught crows to pick up cigarette butts and other small pieces of litter in return for food.

The idea stemmed from the park’s falconry display where the birds picked up roses and brought them to a ‘princess’ in a castle.

At the time Nicolas de Villiers, head of the park, told AFP that it was also about showing “that nature can teach us to take care of the environment.”