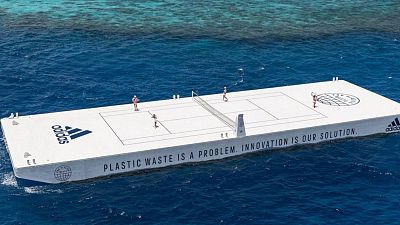 Plastic waste is a problem, but is a floating tennis court on the Great Barrier Reef the solution?

The court in question is made from recycled plastics fixed to a barge. It was launched by Adidas and environmental nonprofit Parley ahead of the Australian Open.

With the tennis tournament over, the surface will now be donated to a local school. But it has left a confusing message about ocean pollution in its wake.

After images of the unusual white vessel were shared online - bearing more than a passing resemblance to a giant lateral flow test - some have called it a “ridiculous PR stunt”.

It launched with a game of doubles between four Australian athletes on 11 January, each dressed in Adidas’s new range of tennis apparel made from Parley-sourced ocean plastics.

“We have chosen to launch this collection in the heritage-protected Queensland marine park to raise awareness and positive discussion around how we can help end plastic waste and protect the Great Barrier Reef,” Adidas said in a statement.

The world’s largest coral reef system is in dire need of support. “Shocked” scientists have warned that the Great Barrier Reef is on the verge of another mass bleaching event after record-breaking temperatures last month.

While the government has just pledged to spend another 1 billion Australian dollars (€626m) to keep it off the world heritage “in danger” list.

Against this backdrop, is the Adidas stunt simply a drop in the ocean or, as some have claimed, actually doing more harm than good?

How has the floating tennis court been received?

‘What about the balls?’ was one of the most common questions raised by spectators on social media. Adidas were quick to respond that they fished every stray tennis ball back out of the sea, with the help of local surfers.

Meanwhile British comedian Josie Long expressed concern about what the court itself could leave behind, if exposed to the waves and sun for long.

“Not trying to be obtuse but won’t this erode and put more micro plastics into the ocean?” she asked on Twitter yesterday.

The brand has preempted other environmental concerns, sharing that it “worked side-by-side with the Great Barrier Reef Marine Park Authority (GBRMPA).” One of the GBRMPA’s approved tug and barge operators was approached to transform the top surface of a working barge into a tennis court surface.

“This barge regularly travels through the Great Barrier Reef for important environmental marine construction and diving projects,” it added.

Adidas and Parley are long-time partners. They first unveiled a concept shoe made from marine waste, including illegal deep-sea ‘ghost nets’ retrieved by Sea Shepherd, in 2015.

And it’s not the first time they’ve scaled up from footwear to a sports court. Before the Australian Open in 2019, the pair unveiled a seaside tennis court also made from recycled plastics at Bondi Beach in Sydney. When the tournament ended it was disassembled and (again) donated to a local school.

The decision to let this year’s tennis court loose on the reef has crossed a line for some, however.

“Nothing says environmental stewardship like installing a piece of floating plastic in an already fragile ecosystem,” one Dezeen reader wrote. Others accused the brand of greenwashing, picking apart the tagline on the side of the court: ‘Plastic waste is a problem. Innovation is our solution.’

The action won some support, however, with people praising the “well designed and conscious work.”

Whatever the verdict, the fact remains that marine debris is a major threat to the health of the Great Barrier Reef, according to the GBRMPA, killing marine life such as turtles, dugongs, dolphins and seabirds.