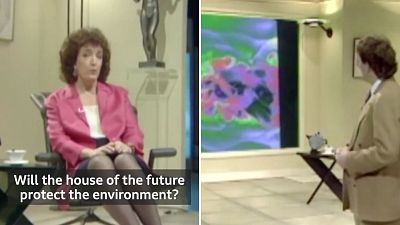 A video from the BBC’s archives in 1989 has resurfaced showing what futurists predicted homes would look like in the decade following the year 2020.

The TV show ‘Tomorrow’s World’ is presented by Christine MacNulty, a tech forecaster who has since written two books on the future of technology. In the clip, various predictions are made, including that homes would have vanishing windows and we would be charging our gadgets using pads on the walls.

While some of the forecasting is on the outlandish side, other claims turned out to be entirely accurate. For instance, experts guessed we would be able to play music at home through simply voice command, with the likes of Amazon Alexa, Google Home and Sonos now at large.

Experts guessed we would be able to play music at home through simply voice command.

"People will want all the benefits of modern technology but without all the cluttered and complex gadgetry that we have today,” the presenter says. "A simple command gives you music, perhaps piped in from a sound library."

Another prediction in the video is that lights would automatically switch on and off as you pass between rooms in your home. Again, not far off, as 2019 saw homeware giant IKEA launch its Smart Home, a collection where you can buy anything from Wifi light bulbs to Electric blinds, all to be controlled by the tap of an iPhone or a simple vocal command.

The blinds are programmed to open when your alarm goes off every morning, waking you up gently and contributing to healthy sleep.

But the futurists were wrong about some things.

They also predicted that walls within the home would all be digitally powered – something we haven’t quite got the grasp of yet. This would mean walls could transition easily from opaque to transparent window pane, giving you the choice to let as much light into your house as you want. They could even play films due to their digital nature.

“So a simple command could turn a window into a wall – and you could decorate it how you want. It could be a television or a computer screen.”

Tamar Kasriel, futurist and founder of strategic agency Futureal, is pleasantly surprised by the accuracy of the predictions. “I think actually there is an awful lot which they got right!” she tells Euronews Green.

In terms of voice control, she says, they were “absolutely” spot on back in 1989. “Around a quarter of UK households have a voice-controlled digital assistant, and the majority of smartphone owners have at least tried out using voice rather than typing.”

What was the tech industry like thirty years ago?

The tech industry has grown exponentially in the last thirty years, so much so that it is practically unrecognisable nowadays. The 1980s saw the invention of the first mobile phone, small enough to fit in your pocket, by a company called Excell.

The M2 Pocket Phone was extremely expensive due to being one of a kind, on sale for around £2,500 (€2,999). Equally, the first Apple Macintosh computer was introduced in 1984, by Steve Jobs, hailed as “a revolution in personal computing" at the time.

So what's the environmental impact of all this modern tech?

Motion-sensing lights are becoming more and more popular and this is not only driven by convenience, “environmental concerns around energy use” are now important too, Kasriel explains.

The clip predicts central heating will learn our daily routines and only heat the rooms we are using - which would be far more eco-friendly.

But the show makes an accurate reference to the onset of climate change, with the presenter speculating, “by 2020, there will be enormous pressure to cut down on fossil fuels. This means that energy management in our homes will become of critical importance.”

The clip predicts central heating will learn our daily routines and only heat the rooms we are using - which would be far more eco-friendly.

It’s true, fossil fuels are still used today on a global scale, with carbon emissions from fossil fuel use having totalled 37.1 billion tonnes in 2018. According to National Geographic, “substantially reducing those emissions will never happen without reducing fossil fuel production.”

According to futurist Tamar Kasriel, “the best way to think about the future is to focus on not just what future technology will be able to deliver, but also to consider human needs, what people want, how they might use things.”

In some ways, anything is possible, but technology needs to “make sense to people”, she concludes, “to be taken up by anyone other than the most technophile pioneers.”