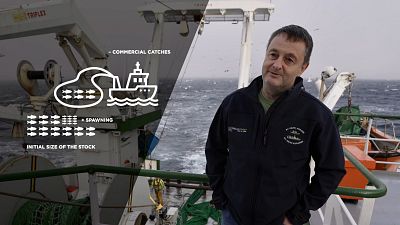 Marine Institute scientist David Stokes leads the Irish Groundfish Survey. Speaking from the research vessel Celtic Explorer off the coast of Cork, he explained to Euronews how the surveys provide a unique insight into fish populations - including some key facts that cannot be found in the commercial catch statistics.

"This is the RV Celtic Explorer, owned by the Marine Institute. [It's a] sixty five metre research vessel. At this time of the year, every year, the Marine Institute runs this fisheries survey, which is part of the International Bottom Trawl Survey Working Group programme.

David adds: "These surveys collect a lot of data, but they're really critical for sustainable fisheries management, because the way we manage fish stocks - really you need three pieces of information:

You need the size of the stock at the start of the year, so we have recent assessments where we can get that information, we know essentially how large the stock is, as far as we know. The next piece of information we need is how much has been removed from the fishery in a given year by the commercial industry for human consumption. So we get that from commercial catch data," he says.

Monitoring the next generation

Explaining the vital role of surveys, David says, "...very importantly, we need to know how many young fish are coming into the fishery to replace what's been taken away, and that's really where these surveys are critical, because there's no other source of information for that - there's no way for most stocks to get a clear indication of how successful spawning has been in any one year without coming out here and doing the sampling - the models just aren't that reliable.

Summing up, David says: "It requires these scientific surveys to come out and actually do the sampling and work out proportionately how many young fish will be coming through into the fishery, so that we know whether we can be, you know, positive, optimistic or we need to be conservative, based on the other data that we have."