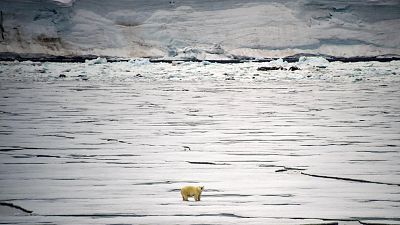 A polar bear is seen in Essen Bay off the coast of Prince George Land - an island in the Franz Josef Land archipelago, Russia.   -   Copyright  EKATERINA ANISIMOVA/AFP or licensors   -
By Rosie Frost  •  Updated: 25/01/2022

Since 1500, Earth has lost around a tenth of its 2 million known species. Experts have recently confirmed that the planet’s sixth mass extinction is underway - and it's being caused by human activity.

But research has revealed that just 10 per cent of people in the UK believe biodiversity loss poses the same threat to our planet as climate change.

Nearly a quarter of people, however, thought that carbon emissions were the biggest threat to life on Earth. Pollution and population growth were considered the biggest threats by 28 per cent of respondents in the survey.

It shows that while we now understand much more about the threat of climate change, the collapse of global biodiversity is still not on many people’s radars.

How is biodiversity loss threatening our future?

Professor David Hill, one of the UK's leading ecologists and chairman of Environment Bank, says it is encouraging that more than 70 per cent of people believe they understand what biodiversity is, according to the survey.

What is worrying is that they regard it as a “lesser evil” when it comes to tackling the climate emergency.

“Loss of biodiversity and natural capital, unless reversed very quickly, will be a massive challenge to our own species. And no longer is it simply about protecting nature, we need to restore it at scale - and quickly,” Hill explains.

The ‘safe limit’ for biodiversity loss, set in 2009, is 90 per cent. Below this figure, ecosystems don’t have enough variety of living things to properly function leading to shortages in energy and food or materials from crop failures.

In the UK, where the research was carried out, more than 60 per cent of biodiversity has already been lost - one of the worst records in the Western world. Agriculture and development have played a major role in the destruction of the natural environment.

“The continued simplification of the countryside and habitat fragmentation and disturbance caused by development needs to be reversed rapidly,” Hill says. “Climate resilience is greater where ecosystems are functioning properly.”

He adds that we must value the wildlife with which we share the planet in order to avoid irreversible impacts on ourselves - and future generations.

Denial of the severity of biodiversity loss is not just limited to the general public either. Scientists at the University of Hawai’i at Manoa (UH Manoa) who confirmed the sixth mass extinction say that views are often based on a biased focus on mammals and birds.

These charismatic animals are often the subject of successful conservation efforts. But, despite fostering a “wonder for nature”, these individual projects cannot reverse the massive impact humans have had on biodiversity.

When experts also looked at invertebrates like insects, they found that Earth may have already lost a staggering 150,000 to 260,000 species in the last 500 years.

We are the only species that has conscious choice regarding our future and that of Earth’s biodiversity.

“Including invertebrates was key to confirming that we are indeed witnessing the onset of the Sixth Mass Extinction in Earth’s history,” says Professor Robert Cowie from UH Manoa.

Some also believe that humans are just another species playing its role in the Earth’s history. Others say biodiversity loss is the natural evolutionary trajectory of the planet.

Cowie, however, believes we are the only species capable of manipulating the biosphere on a large scale.

“We are not just another species evolving in the face of external influences. In contrast, we are the only species that has conscious choice regarding our future and that of Earth’s biodiversity.”