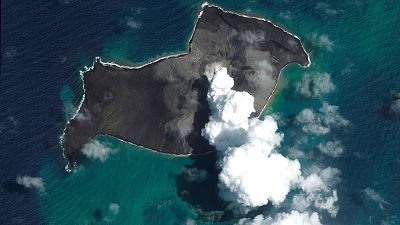 Scientists issued a tsunami warning ahead of the Hunga Tonga-Hunga Ha'apai volcano eruption, but satellite photos showing the sheer size of it are astonishing people around the world.

The volcano is located about 64 kilometres north of Tonga's capital, Nuku'alofa.

The blast from the volcano could be heard in Alaska, its plume of ash, steam and gas rising like a giant mushroom above the South Pacific.

Tonga is a Polynesian country of more than 170 South Pacific islands and home to about 100,000 people; communication lines with the country have been severed by the explosion and details of deaths and how badly affected the islands are unknown.

The country is located in region of the ocean riddled with volcanoes and Tonga is used to seeing volcanic eruptions.

Tonga is used to some volcanic eruptions

There was seismic activity in the region before the massive explosion on 15 January 2022, but the colossal size of this one was unexpected.

Professor David Tappin the British Geological Survey's Principal Investigator says the number of volcanoes in the area means there is a lot of seismic activity which is constantly displacing rocks and the surface below the South Pacific.

"The Earth's surface is a reasonably constant area, so if you're creating rocks matter at one location, you go to destroy it somewhere else and the the destruction takes place along what we call convergent margins and this is where these thick oceanic plates, that are 10 to 15 kilometres thick, plunge into the mantle," he says.

Professor Shane Cronin from the University of Auckland has also been following developments since the last major explosion.

He explains the eruption at Hunga Tonga-Hunga Ha'apai has been building up over the past 20 years.

The eruption at Hunga Tonga-Hunga Ha'apai has been building up over the past 20 years.

"Over that time, the magma has been building up inside the edifice, and it's been slowly sort of releasing gas. But what happens is that you've got seawater seeping down and the hot magma below, so you get a kind of a ceiling effect that goes on above the magma where the gases and the pressure is held in. But the magma still keeps arriving and the pressure rises and rises to the point where the whole edifice can't contain it any longer. And then you have the sudden explosive release of that material and it breaks apart," says Cronin.

According to Cronin, the initial eruption is just half of the extraordinary event.

He adds, "That would be an amazing big blast. But what happens next is that you've got that material that's one thousand two hundred degrees C and it comes, it's been broken apart by the internal gas pressure and that material is then touching water. That's only about 20 degrees C and you get this massive splashing of water into steam. And when you go from liquid into steam, it's about a 70 times expansion rate. So you've got a turbo charge on your explosion.

"So that's why it went so violently up and out. And I was just reading some analysis now about the column height being reaching well above 30 kilometres, and some estimates are as high as thirty nine kilometres, which is for some of the meteorologists saying that this is the highest column that they've ever recorded."

Ash is coating the island

Perhaps the biggest problem Tonga is experiencing is the ash which is now coating the main island, transforming it into a grey moonscape and contaminating the rainwater that people rely on to drink.

One of the major contributing factors to the vast size of the column which shot out of the water was the depth of the ocean where the explosion took place.

One of the major contributing factors was the depth of the ocean where the explosion took place.

Cronin believes the event would not have appeared as dramatic had the volcano been much deeper, because the explosion would have been below the ocean surface, instead what we witnessed were dynamite conditions.

"I think it's really to do with that Goldilocks zone. You know, if there's too much water, it just it just puts pressure on the magma and puts pressure on the edifice and so when the when it does explode, when it does come out of the top of the edifice, that water pressure suppresses that," he says. "But if you've got just the right amount of water where you get a mixing between the magma and the water, absolute dynamite conditions, well way better than dynamite actually.

"Tonga is actually one of the places on Earth where the rate of subduction, so where one tectonic plate slides below the other, that rate is incredibly high. And so basically what's going on there is that you've got very fast convergence between the two tectonic plates, and also quite thin crust and so that means that you get very high supply of materials that can start to melt.

"So you have volatiles from the plate that go down and they melt the rock there," explains Cronin.

A ring of fire

This vast production of boiling magma, or molten rock in the crust of the Earth is described by Cronin as a ring of fire.

He says: "It's part of the so-called Pacific Ring of Fire and there you have this really high rate of magma production."

Hours after Hunga Tonga-Hunga Ha'apai sank into the sea, the volcano erupted with devastating force leaving very little behind. The shockwaves crossed the ocean to cause an oil spill and two drownings in Peru, the coasts in Japan and New Zealand, even West Coast America felt the impact.

The volcano erupted with devastating force leaving very little behind.

Cronin explains how such powerful shockwaves are created after the explosion:

Communications with the island nation are limited because the single underwater fibre-optic cable that connects Tonga to the rest of the world appears to have been severed during the eruption. The company that owns the cable said the repairs could take weeks.

A second undersea cable that connects the islands within Tonga also appeared to have been severed.

The UN World Food Program is exploring how to bring in relief supplies and more staff - and has received a request to restore communication lines in Tonga, which is home to about 105,000 people.