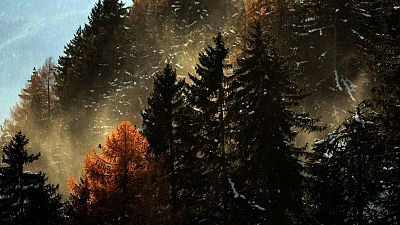 Italy is the second largest carbon sink in Europe, according to the Chloris data.   -   Copyright  AP Photo/Matthias Schrader
By Lottie Limb  •  Updated: 13/01/2022

Mapping the world’s carbon stores is essential for taking stock of the climate crisis. It informs our climate solutions, the emissions targets that countries set and so - it goes without saying - the figures need to be as accurate as possible.

It’s not an easy picture to take, however. Humans are constantly upsetting the amount of carbon in forests, soils and oceans - natural ‘carbon sinks’ that should absorb more CO2 from the atmosphere than they release. So much so that the Amazon rainforest was found to be emitting more CO2 than it sequestered last year.

A new biomass mapping tool launched on 13 January takes us ever closer to Earth’s actual dynamics. Chloris, founded by Marco Albani and Dr Alessandro Baccini provides a net view of the planet’s aboveground biomass (AGB), showing how it has changed over the last 20 years.

“The industry practices around carbon measurements in land and forest are still very much stuck in the old way of doing things,” says Albani. The scientists hope their combination of satellite observation, fieldwork and AI can offer greater “integrity” to nature-based solutions.

Chloris has a wide set of applications. It can be used by companies looking to acquire carbon credits or those running projects to identify areas with the highest carbon stock. It can be harnessed by experts monitoring the risk to forests within supply chains.

And, most importantly, it gives governments a more detailed way to meet their nationally determined contributions (NDCs) under the Paris Agreement.

Publicly available on Microsoft’s Planetary Computer, a higher resolution version of the map is available for clients at 30 metres. That’s around the length of a tennis court, or the crown of a single, mature tree in a tropical rainforest. Biomass at this level can be measured to give an incredibly detailed global picture.

So what has the pioneering dataset revealed so far?

France has the fastest growing number of carbon sinks

Contrary to what we might expect, carbon sinks are growing the fastest in central and southern Europe.

The data shows that France was by far the largest carbon sink from 2003 to 2019, absorbing over 764 million tons of CO2 with an annual average of almost 48 million tons. Italy came second, taking up 444 million tons CO2 over the same period, followed by Spain, Germany and Greece. By contrast, the ABG stock was fairly stable in Sweden and Finland.

“Part of that is simply that these countries are not harvesting as much as is being grown, so there’s a lot of forests that are managed more conservatively,” explains Albani, “as well as a return of agricultural land to forest over the last three to four decades.”

Chloris can pinpoint the impact of climatic events, such as the Vaia storm which devastated Italy’s northeastern forests in winter 2018. One day alone saw around eight million cubic metres of wood knocked out, the same amount harvested in an entire year in Italy. Accordingly, the map shows a big drop in sequestration, turning the Veneto and Trentino-Alto Adige regions into net carbon sources.

The increased frequency of storms due to climate change shows how quickly these dynamics can reverse, Albani says.

Another surprising fact from the data is that China is the biggest AGB sink in the world, removing roughly one gigaton of CO2 a year from the atmosphere. This is despite being the world’s largest annual CO2 emitter from fossil fuels.

The data also backs up what we already knew: the dense and ancient rainforest of the Congo Basin is vital to holding runaway climate change at bay. Spanning six countries, it holds 11 per cent of the total global carbon stock.

The challenge, as Albani explains, is finding a way “to fulfil the rightful aspiration of the development of these countries [including Gabon, Cameroon and the DRC] in a way that preserves much of it.”

In cutting-edge technicolour, Chloris’s findings boil down to a - or rather the - climate justice issue.

“This is why it’s important that countries that have already achieved a high level of per capita income curb their own emissions and grow their carbon sinks as fast as they can because they have a stronger responsibility to do that,” adds Albani.

The data shows that these biomass sinks should not be overlooked in European domestic policy. “Nature-based solutions are not just something that matter for others,” he says.

European nations should question the potential of their land: “can this sink continue to work at this rate? Will it be degraded in the future by climate change? Or could it actually be bigger, could we increase the size of this sink by putting in place the right policies?”

With an increasing number of wildfires, countries like the US and Russia must also have measures in place to minimise the chances of their carbon stores going up in smoke, says Baccini.

Strengthening the carbon market system may be contentious to some environmentalists. But in essence, Chloris (named after the Greek goddess of new growth and flowers) evaluates what he calls “the only tech that can deliver at scale to mitigate climate change right now”: trees.