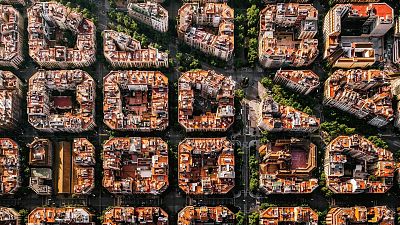 Barcelona's rooftops could be painted white in a bid to prevent heatwaves suffocating the city   -   Copyright  Getty Images
By Ben Anthony Horton  with AP  •  Updated: 11/01/2022

For a long time, the terracotta balconies of Barcelona have been synonymous with the city of love.

But all that could be about to change in a proposed makeover, which could see the rooftops of the Catalan capital painted white in an effort to reduce the devastating impact of heatwaves.

Occurring more and more frequently, the city’s heat island effect has increased temperatures by up to eight degrees Celsius in the city centre.

And as the climate crisis advances, scientists from the Autonomous University of Barcelona (UAB) have presented a dramatic proposal which could change the face of the city for good.

According to recent figures, Europe is warming faster than the global average, with annual temperatures increasing between 1.7 and 1.9 degrees Celsius in urban areas.

Barcelona is no exception, with 2020 seeing the city's warmest year for over two centuries - registering an average temperature of 16.8 degrees Celsius.

In response to this problem, a group of climate change researchers are pioneering a project to paint the city's rooftops white - claiming it could reduce temperatures by up to 4.7 degrees during heatwaves.

"Cities with urban heat islands could have their rooftops painted white," says Sergi Ventura, a meteorologist from UAB.

"In our study, we have detected an average reduction in temperature of 0.8 degrees during heatwaves. And peaks of up to four degrees lower at certain locations and during certain hours of the day."

The research shows that pre-existing building materials in Barcelona retain daytime solar radiation, contributing to the accumulation of heat throughout the city.

Instead, “cold rooftops” could be created by painting top surfaces white. This would increase the albedo - the percentage of sunlight reflected by the surface without being absorbed by the building.

"We are collaborating with public entities such as [Barcelona's] Urban Master Plan,” continues Ventura. “They are in favour of painting roofs white. But so far nothing is being done. This is a 'low-cost' strategy. And according to our predictions, in a city like Barcelona it would work even better than increasing green spaces.”

Will white rooftops be enough to keep Barcelona’s residents cool?

In recent years, Barcelona’s council has addressed the issue of climate change by planting and managing more trees in urban areas.

But as the problem intensifies, green areas alone won't be enough to prevent the increasingly frequent heatwaves which threaten the city. Some experts fear that more drastic changes are needed.

"We must aim for a change in the configuration of the city,” says Adrian Fernandez, an environmental activist for Greenpeace.

“Changing the colour could constitute a patch solution to the problem. It could bring positive results. But facing the challenge of more frequent and severe heatwaves, we need bigger solutions."

Regardless of the study’s findings, the success of the project now lies in the hands of Barcelonians living in top floor apartments.

"I think it's an excellent idea,” says Samuel Saintot, a software consultant whose flat enjoys panoramic views of the city.

“I would definitely do it. And I really hope that everyone will do it. We would be saving energy [on air conditioning] which would be a very, very good thing for global warming."

Watch the video above to see Barcelona’s climate innovation.