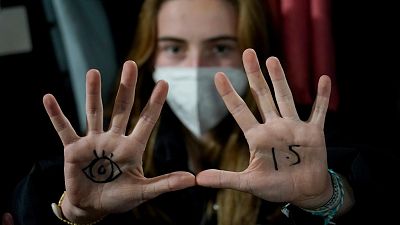 The year is coming to a close and with that, we start looking to what is in store for 2022.

The last 12 months have seen people power come out on top with wins on environmental issues around the world. On the other side, we were warned about the “unequivocal” effect human actions were having on our planet.

Experts warned of “code red” for humanity if we don’t change our ways and the climate crisis was top of the agenda in international politics and company boardrooms worldwide.

With January on the horizon, it's no time to ease up the pressure and interest that has been built around climate change in 2021.

So what should we be looking out for in the coming 12 months?

It feels like a neverending revolving door of climate promises. But with 2030 emissions targets still leaving the world on track for well above 1.5C of global warming before the end of the century according to scientists best estimates, it’s crucial governments come to COP27 in Egypt with much more ambitious goals.

Funding for climate loss, adaptation and damage also needs to be on the agenda with developing countries saying current commitments are inadequate. In the second half of next year, the Sixth Assessment Reports of the Intergovernmental Panel on Climate Change are due to be released. These will take a look at the impacts, mitigation efforts and adaptation we need for climate change.

As a result, it is expected that at the next UN climate conference, finance and emissions cuts will be in the spotlight once again.

A good year for biodiversity?

COP26 was one of three climate conferences that took place in 2021. Known as the Rio Conventions, they also included the Convention of Biological Diversity or CBD. Due to the pandemic, this was split in half and part two of the UN Biodiversity Conference is expected to take place in person in the spring of 2022.

Countries will be looking to adopt the Kunming Declaration, an agreement that will “redefine our relationship with the natural environment”. After missing goals set by the last framework of this kind, these new commitments will be essential in addressing the ongoing decline of biodiversity around the world.

It's a sad fact that 2021 saw more people than ever feel the growing impact of climate change. From floods across Europe to the first climate-induced famine in Madagascar. The news wasn’t good.

And according to polling data from Ipsos’ Global Advisor survey, most of us expect it to get worse in 2022. 60 per cent of people say it is likely that there will be more extreme weather events in their country in 2022 than in 2021. Unsurprisingly that figure rises to 72 per cent in the Netherlands, 69 per cent in the UK and 66 per cent in Belgium - places that saw the worst impacts of flooding.

While this news seems like doom and gloom, it's worth remembering that there is a growing awareness of how we are all impacted by the crisis. If nothing else, growing concern shows that we are ready for our governments to take significant, concrete action on climate change.

The pandemic has definitely put a damper on just how much we choose to fly. Whether it is for business or pleasure, it seems this pause in our travel plans could have changed our outlook altogether.

The data from Ipsos’ Global Advisor Survey found that 45 per cent of people expect to see us take fewer flights than we did in 2019. In Asia, people are even more confident with that percentage rising to over 60 per cent in China, Singapore and Malaysia.

That ties in with predictions from travel experts who say that sustainable travel is set to be one of the biggest trends in the industry next year. According to the Expedia group, almost 60 per cent of people are now factoring environmental and social costs into their holiday plans.

This definitely feels like one we should have conquered in 2021 but there is growing momentum for change that could see the end of fossil fuels for many countries next year. Especially with climate scientists, experts and activists saying new oil and gas projects are incompatible with a 1.5C future.

Denmark and Costa Rica launched an ambitious alliance to phase out oil and gas in November. They were joined by 11 other members of the new Beyond Oil and Gas Alliance with experts praising the announcement as what “real climate leadership looks like”.

The fight to #StopCambo continues.

The UK must now officially reject Cambo, all new oil & gas projects and commit to a #JustTransition for oil & gas workers and impacted communities.

Help keep the pressure up! Join the next campaign call on Dec 16th ⤵️https://t.co/g8fn7qYgsEpic.twitter.com/E3o19c7r77

For those that didn’t commit to pledges like this one, the pressure has been on from environmentalists to set an end date for new projects. As COP26 host, the UK was conspicuous in its absence as plans for the new Cambo oil field in Scotland were highlighted by activists.

But in the last couple of weeks, Shell announced that they would be pulling out of the project and activists celebrated what looks like a “deathblow” for the new oil field. Keeping the pressure on, it seems, is the best way to bring about a fossil fuel-free future.

Ski resort expansion is destroying some of the last living glaciers