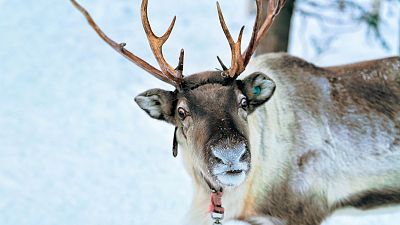 With the Arctic warming three times faster than the rest of the planet, reindeer herders in Finnish Lapland are already seeing the effects of climate change.

Tens of kilometres into the Arctic Circle, reindeer herder Anne Ollila ventures into -25C temperatures to feed her herd. This is an increasingly important task as the animals have difficulty getting enough food for themselves.

A 20-year study of reindeer on Norway's Svalbard archipelago by the James Hutton Institute revealed in 2016 that reindeer had already got smaller and lighter. And researchers believe climate change is to blame.

Trying to limit future warming to 1.5C was the "overarching objective" of COP26 - a goal that was just about kept alive by the Glasgow Declaration. Scientists say that keeping global warming at this level can help us to avoid or at least lessen some of the most catastrophic consequences of climate change.

But according to Finland's Meteorological Institute, mean temperatures in Lapland have already increased 1.5C over the past 150 years.

"At least 20, 30 years, we have had winters getting more unstable," Ollila says.

Warmer winters mean more rain. When rain falls on snow, it freezes, locking reindeer's food - such as lichen - beneath the ice. That means the animals are unable to smell or dig for it.

As a result, researchers believe the reindeer starve, abort their calves, or give birth to much lighter young.

There are around 200,000 reindeer in the country and about 4,400 owners, according to Finland's Reindeer Herders' Association.

Already under pressure from mining, forestry and land-use, herders fear climate change could spell an end to their traditional lifestyle.

Watch the video above to learn how climate change affects reindeer.

France: 'Warmest ever' end of year good for sunseekers, bad for skiers