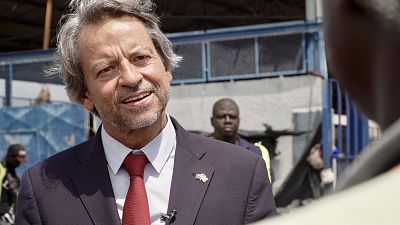 West Africa has been called "the black hole in the sea" due to the huge amount of illegal fishing that takes place in the region.

This unregulated fishing is estimated to cost billions of euros and is thought to have resulted in hundreds of thousands of local fishing jobs being lost.

Abidjan is West Africa’s largest port. The monitoring of fishing activity here has been significantly stepped up thanks to EU funding made possible through a Sustainable Fisheries Partnership Agreement.

In exchange for allowing EU vessels, mostly from Spain, Portugal and France, to fish in its waters, Ivory Coast gets around 680,000 euros a year.

"You don't want to eat fish and get sick, that's one thing. But besides that, you also don't want to import a problem into the European Union when purchasing fish - such as illegal fishing, or other potential problems, he says.

"Fish is a sustainable resource if managed well. If it's not managed properly, the fish will simply disappear. The European Union buys almost all of the fish that arrives in this port. It's not only fish from the Ivory Coast, it's fish from all over the region - and so it represents, I would say, about 40,000 to 50,000 direct jobs, and about half a million indirect jobs. So it is very important to preserve these jobs, by taking a sustainable approach.

Insisting it's a win-win situation for both Ivory Coast and the EU, the ambassador adds: "Ivory Coast wins because 91% of its fish are exported to Europe. This doesn’t just concern sales in terms of exports, it’s also about the creation of jobs - a whole value chain is in place which is vital for Ivory Coast. But the European Union also wins because we import fish that I would say is clean, that is to say, it hasn't been fished with methods that will eradicate fish - that’s important. In addition it has passed health and safety checks, meaning it is fish that is good for the consumer. So we win as well."