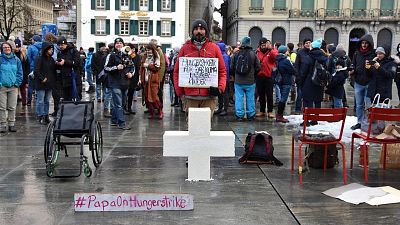 On 9 August, Guillermo Fernandez’s daughter celebrated her 13th birthday. It was the same day that the IPCC released its “code red” report on climate change.

This was the moment he says he realised his daughter’s future would look like hell.

“What struck me is that all those figures and numbers that I have kind of always known coldly, suddenly became the despair of my daughter, in her own eyes when she would be 23,” Fernandez tells Euronews Green.

“As a loving father at that, I couldn't accept that I would let that pass without doing anything I could to avoid it.”

So on 1 November, the 47-year-old father of three quit his job in IT and sat down in Parliament Square in Bern, Switzerland to start a hunger strike.

I’ve never been an activist or militant, never been politicised, to tell the truth. But I felt so alone with myself, to find out what I could do, what was in my hands.

Fernandez’s protest urged the Swiss Parliament to be educated on the scientific facts of the climate and ecological emergency. And he says he was ready to die for politicians to start taking the crisis seriously.

“I’ve never been an activist or militant, never been politicised, to tell the truth. But I felt so alone with myself, to find out what I could do, what was in my hands.”

An overwhelming amount of support

It didn’t take long for hundreds of people to turn out in support of the hunger strike - including experts from the IPCC and IPBES themselves.

“Actually, it's been, strangely enough, a totally amazing and magic moment. From the first day on people came with blankets, hot tea, asking always what I would need - how they could help,” Fernandez explains.

Many brought with them their own worries about the future of their children and grandchildren, sharing the realisation that they weren’t alone in their fears. Others joined him in helping to organise and offered him a warm space to sleep off of Parliament Square in Bern.

On 29 November, 26 climate scientists from Switzerland, including authors of the “code red” report, sent a letter to the parliament backing Fernandez’s demands and immediately offering to organise training.

“Swiss climate policy and politics are admittedly insufficient and not in line with the long-term temperature goal agreed to by ratifying the Paris Agreement, and Guillermo Fernandez is already in his fifth week of hunger strike,” they wrote.

Fernandez says he owes his survival to these people; “when I think of it everything is quite miraculous because all of these tiny things made me survive the story.”

‘I realised the day after that she would let me die’

On the 17th day of his strike, Federal Councillor Simonetta Sommaruga came to visit Fernandez - the person his request was addressed to. They shared a cup of tea and he says it was the only scary moment of the entire ordeal.

The Councillor told Fernandez that she has felt stuck - it had been difficult to negotiate at COP26 in Glasgow. Sommaruga brought up the fact that a recent law to tax carbon emissions in the country failed to pass - and added that she wanted to be satisfied with any measures in the future. Even if they would “not be enough to achieve our objectives.”

“I realised the day after that she would let me die. She didn't care at all. And that was a scary realisation.”

But the reaction from elected representatives wasn’t all a source of dread. One group, he explains are very close to his heart, are the female politicians across parties that voiced their support.

“It really changed my way of seeing politics nowadays,” Fernandez goes on. The women came to him saying “I have kids, I'm worried I want to do something.”

“I don't want to play gender games here. But factually, that's exactly what happens. It's so strange.”

Success at last - but the story doesn’t end here

Last Thursday, Fernandez declared “Victory!” following an announcement that MPs had agreed to be briefed by leading scientists on the latest climate change research.

After 39 days, he had lost 20kg and finished his strike by eating a banana outside of the parliament building.

And going forward, on 2 May 2022, all of Switzerland’s parliamentarians are invited to a presentation of the scientific facts about climate change. While none of them can be forced to attend, it will allow the people who elect them to see who cares about the future of the planet.

Fernandez adds that those who do come and don’t act can then be held accountable too.

“Our kids are going to live through hell if we don't do anything,” he says, “and even if we do it is going to be tough.”

Our kids are going to live through hell if we don't do anything and even if we do it is going to be tough.

Those who rallied around the hunger strike are already in contact with politicians across Switzerland and now they want to open up talks about what they can do to speed up action on the climate crisis as much as possible.

After the massive amount of support Fernandez saw, he is hoping the voices of those who want action can be better represented in these conversations.

“Having seen how parliamentarians can be committed to find solutions that are blocked by cynical and in my humble opinion, useless people,” he concludes, “it's interesting to discuss together how we can unblock those situations so they can move forward.”