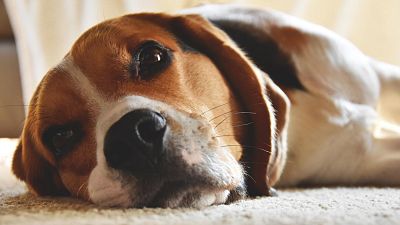 Shocking images appearing to show cigarettes being tested on puppies have been doing the rounds on Instagram this week.

The images are of beagles wearing masks, leading us to believe they are breathing in tobacco smoke.

The Instagram post shared by Karmagawa has to date received 2.7 million likes​​ and 77,000 comments decrying the use of beagle puppies to test out cigarettes.

But, with the dangers of tobacco smoke now widely proven, is cigarette smoking really still being tested on animals, or are these images misleading?

After our recent article debunking an Instagram post which stated that a tree would be planted for every pet photo shared, we decided to investigate whether these images actually show what they say they do.

Is tobacco still being tested on beagles?

Tobacco testing on dogs was banned in the UK in 1997, followed by a ban on animal testing of cosmetic products in 1998.

In Europe, tobacco testing on animals is banned in Belgium, Estonia, Germany and Slovakia, but there is no EU wide ban.

“Unfortunately, as long as the experimenters fill out the right paperwork, there are very few limits on what can be done to animals in laboratories. As such, under EU Directive 2010/63/EU experiments that involve developing and testing tobacco products may be authorised under certain circumstances,” says PETA.

Experiments that involve developing and testing tobacco products may be authorised under certain circumstances.

Cosmetic testing on animals was prohibited in the EU in 2013, and PETA hopes that tobacco testing will soon follow suit.

Animal testing is no longer required by law for tobacco products in the US either, though similarly to the EU, there is no outright ban on it.

This practice is now generally carried out using mice though, so we asked PETA whether they knew of any recent cases involving beagles specifically.

“PETA’s not aware of any recent studies using dogs in cigarette inhalation experiments, especially not for the development of tobacco products, which is banned in some countries.

“However, basic and translational research is not banned for chronic obstructive pulmonary disease (COPD) where they often use mice who were exposed to cigarette smoke to provoke the disease.”

So if the beagle pictures aren’t showing recent tobacco testing, what are they showing, and what is the source of the images?

Where do the beagle images come from?

If you scroll through the comments of Karmagawa’s Instagram post, you’ll find one from @winsdiarrhea. They have traced the two beagle images back to their source in this Japanese article from four years ago.

The article covers the Japanese ban on testing pesticides on dogs, which came into force in 2018. This makes it likely that the photos of the beagle puppies are from a Japanese pesticide test.

The picture of the cigarette machine, put there to persuade us that cigarettes are being tested on the dogs below, is even more misleading.

The source of the image, discovered by @userusernomi, is the Flickr account of Yessmoke Laboratory in Italy - who test the quality of tobacco products. The machine in question is testing the burn rate of cigarettes, and has absolutely no connection with animal testing.

The machine in question is testing the burn rate of cigarettes, and has absolutely no connection with animal testing.

Karmagawa are a charity set up by Timothy Skyes, a self-made millionaire from the US who built his fortune trading penny stocks. Skyes now teaches penny stock trading through his website and founded Karmagawa, an online apparel store, which states that it gives 100 per cent of its proceeds to charity.

The Karmagawa post says that it’s a repost from animal rights charity @animaliberaction, though it appears their original post has now been taken down.

Despite being debunked in the comments, the Karmagawa post remains live, with the company insisting that cigarette testing on animals is still taking place. The post has also been shared on their Twitter account.

What other products are tested on beagles?

Though tobacco testing on beagles is likely to be very rare - though many countries do not have an outright ban - the dogs are also involved in other product testing.

Beagles are one of the most widely used dog breeds in animal testing laboratories because of their docile temperament and size. They also have obedient natures and tend to have decent sized litters, making them easy to breed.

Beagles are one of the most widely used dog breeds in animal testing laboratories because of their docile temperament and size.

In the UK, beagles are bred for drug testing experiments, which is required under UK law. All new drugs in the UK must be tested on at least two different species of mammal, and one of these animals must be a large, non-rodent. Due to their size, beagles share some similarities with humans, which is why they are used so regularly.

The Animals Act of 1986 states that no animal experiments should be conducted if there is a realistic alternative, but with animal testing baked into UK law it is hard to avoid.

Camp Beagle and banning animal testing in the UK

Just this week, animal rights charity Camp Beagle has been protesting outside MBR (Marshall BioResources) in Cambridge - a facility which breeds animals for biomedical research and animal testing - alongside popstar Will Young. In fact, on Young’s placard, you can see the same picture which is used in the Karmawaga Instagram post.

The protest, which started in June this year, has been running every day since.

“Will Young has supported us for a few months and said he would come down to help us on Tuesday as we suspected Cambridgeshire police would rally to allow MBR to send more vans of pups to their death,” says a spokesperson for Camp Beagle.

Cambridgeshire police came in force to allow two vans of crying pups to be taken to the labs to end their days.

“Will was there a few hours- the police were present and on the scene. Sadly just after Will left the site - Cambridgeshire police came in force to allow two vans of crying pups to be taken to the labs to end their days.

“This is all at the cost of the British taxpayer - it amounts so far as a minimum of £250k (€300,000) in costs.The police have confirmed none of this is covered by US multi-million company MBR Acres.”

Camp Beagle is calling for all the puppies to be released and re-homed - in a similar manner to this US case in 2019 - and for the UK to rethink its approach to animal testing, which it believes delivers very poor results.

The charity is urging the public to write to their Members of Parliaments (MPs) and encourage them to sign up to EDM 175, which is calling for a public scientific hearing on animal testing - 90 MPs have signed up so far.

If you’d like to learn more about Camp Beagle’s current campaign to end animal testing you can do so here.