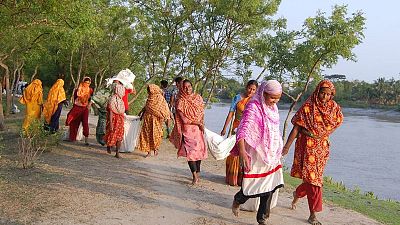 Six organisations have just been awarded funding for their gender-just climate solutions from the Women’s Environment and Development Organisation.   -   Copyright  BINDU NGO
The opinions expressed in this article are those of the author and do not represent in any way the editorial position of Euronews.
By Anne Karpf  •  Updated: 17/11/2021

Anne Karpf is the author of How Women Can Save the Planet and Professor of Life Writing and Culture at London Metropolitan University. In this article she argues that while COP26 has turned out to be a cop-out, women-led climate solutions offer a source of hope.

A damaging new virus appeared this weekend. Whipping around the world at phenomenal speed, its name is post-COP melancholia. Its symptoms? A sense of hopelessness, mixed in with disappointment and fear.

No vaccine for it has yet been discovered, but there is an antidote. You need to turn your gaze away from the big players - the negotiating teams of the high polluting nations, the fossil fuel companies - who clearly went to Glasgow to concede as little as possible and make it look like a lot.

You need to ignore the cavernous space where dramatic breakthroughs should have materialised but didn't, and refocus away from the international and national, towards the local.

And above all, you have to look to women.

Not because women are Earth Mothers (let’s bury this stereotype for good), or should be tasked single-handedly (despite the title of my recent book) with saving the planet, but because reams of research show indisputably that women - especially women of colour in the global South - are hugely impacted by the climate crisis, even though they’ve done the least to cause it.

Contrary to what many people think, the climate crisis does discriminate: it aggravates gender inequality, increasing domestic violence, forced marriage and trafficking.

At the same time gender inequality excludes and marginalises women from playing a prominent role in environmental decision-making.

How are women leading on climate solutions?

Yet when women are involved in negotiations and projects - again a wealth of robust research confirms this - the outcomes are greener and properly sustainable.

Barely noticed beneath the bad news last week was some good. Six projects from around the globe were selected for the pilot round of the Gender-Just Climate Solutions Scale Fund, led by the Women’s Environment and Development Organisation (WEDO).

“One of the biggest challenges we hear from partners and activists is that climate funding does not reach local communities. This new women’s rights collective scale fund will be another tool to fill this gap,” says Bridget Burns, WEDO Director.

The projects include one from Safeplan Uganda, which diverts women and young people away from sugar cane production, often a source of deforestation, towards beekeeping and honey production.

Another winning project, BINDU, in Bangladesh, whose Southern West coastal area is super-vulnerable to climate change, promotes women’s leadership in disaster risk reduction and resilience. This builds women’s capacity to actively participate and respond before, during and after disasters.

Poor women are 14 times more likely (yes, you read this right) to die in climate disasters than men.

This is critical, because poor women are 14 times more likely (yes, you read this right) to die in climate disasters than men. Not because of biology or chromosomes but gender: when disaster hits, their ability to escape is hampered by their need to protect the children, elders and cooking equipment in their care. By placing them in a central role in disaster preparation, they can help design plans that take account of women’s needs and situation.

Tackling both the climate crisis and gender inequality

The exciting thing about women-focused climate solutions is that they tackle gender inequality and the climate crisis at the same time.

In Gujarat, India, for example, a locally developed rainwater system helps avoid crops getting waterlogged during the monsoons and then keeps them irrigated in the dry season. Each Bhungroo is jointly constructed, installed, maintained and owned by five of the poorest and most marginalised women in the community, who get trained in the role.

As a result they gain irrigation and land rights and then start taking on political positions in their community - triple bullseye.

There are rafts of innovative projects in the Global North too, like Paris mayor Anne Hidalgo’s plans for the 15-minute city, whose residents can meet all their needs - for work, shopping, health, culture etc - within 15 minutes’ of walking or cycling distance from their own home, so minimising the need for motorised transport.

This ‘Paris en Commun’ initiative goes against all the ‘zoning’ tendencies of the modern city, built upon the separation of work and home and which causes so many problems for so many women.

Just imagine how much simpler this could start to make childcare needs.

Yet we hear less about these projects than about the frankly preposterous geo-engineering solutions to the climate crisis being pushed by some male scientists.

Anyone for a giant space umbrella to shield us from the sun?

And if this is a mite too modest for your taste, how about 16 trillion flying space robots to deflect the sun’s rays instead?

Preposterous geo-engineering solutions to the climate crisis are being pushed by some male scientists.

Such proposals have the merit of allowing the rich nations to continue to emit without limit. They aren’t just bonkers but also bring potentially dangerous side effects. Yet they’re taken seriously.

But when groups like the Women’s Budget Group and the Women’s Environmental propose a Feminist Green New Deal, which puts women’s neglected needs at its heart, they regularly get dismissed as fantasists. Alice would recognise this Wonderland.

While we’re waiting for the big players to take action that matches the gravity of the situation (it may be quite a wait), we need to draw hope from these pioneering and innovative women-led projects, which often start small and local but then can scale up.

Along with the magnificent energy of the climate protesters on display in Glasgow, they are the best antidote to post-COP melancholia.