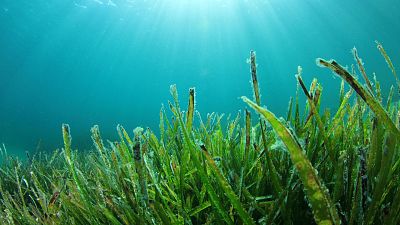 With the world’s population estimated to reach 9.8 billion by 2050, scientists are looking at new ways to overcome inevitable food shortages linked to climate change.

Professor Patricia Harvey from the University of Greenwich is the head of the Aquatic Biotechnology and Biology Group at the Natural Resources Institute.

She is pioneering a new approach to consumption - Ocean Flexitarianism - which advocates eating food from the lower levels of the oceans, such as algae and seaweed.

“Inevitably we're going to be looking at the water to see whether we can get more food from there.”

Her research - which has been highlighted as part of the University Alliance's Powering Action on Climate Change campaign - is hoping to draw attention to microalgae as a renewable, sustainable and nutritious food source for generations to come.

What is algae and why is it good for you?

Microalgae are tiny photosynthetic plants that occur in both fresh and saltwater environments.

While some algae can be toxic, there are numerous species that are rich in essential nutrients.

Just one tablespoon of spirulina (blue-green algae) provides four grams of protein, along with a healthy dose of calcium, iron, magnesium and potassium.

“They have carotenoid vitamins, which we need because we can't make them, and unsaturated fatty acids, which we desperately need for our brains.”

Fish eat these plants as part of their diets, making microalgae the original source of fatty acids like Omega-3.

But while fish consumption in Europe is higher than anywhere else in the world, microalgae are yet to be explored as a serious food source across the continent.

“Something like 98 per cent of all of the seaweed that is consumed is consumed in China. But why aren't we doing it in Europe?”

Will seaweed be the food of the future?

Microalgae consumption may not yet be widespread, but the case for it becoming a source of food in the future is strong.

With the threat of land and freshwater shortages imminent, agricultural practices will need to adapt to meet the needs of a growing population.

For Harvey, microalgae could be “the perfect solution.”

“Algae consume carbon dioxide like plants. They use solar energy, we don't have to grow them with high-performance energy systems, and they grow in saltwater from the ocean, which we can't drink.”

Dunaliella is just one form of microalgae that Harvey and her team are currently studying.

It boasts “a floral flavour”, and thanks to Harvey’s lobbying, the new ingredient could be available to eat in the UK within a few years.

“I would say that these are really important species to explore and to harness in a much bigger way,” she continues.

“I can't see that people are going to stop reproducing themselves. So we're going to need to feed people and microalgae might just be the answer to that.”

Watch the video above to find out more about the future of food.