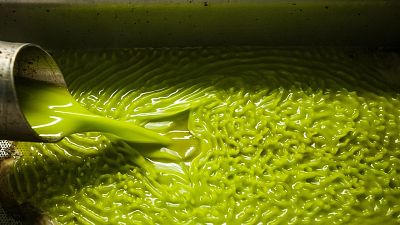 Locals have come up with an affordable and eco-friendly way to generate fuel in Syria, as diesel prices skyrocket around the country.

Fuel made out of olive waste is being used to heat homes during the winter in a town called Armanaz, in the northwestern part of Syria’s Idlib province.

Known as ‘birin’, the waste derives from the seeds of olives leftover from the olive oil-making process. During the production of olive oil, large amounts of pomace (pulpy residue) aren’t used - so these are pressed using a special machine and dried in the sun. .

The dried waste is then turned into cylindrical pellets which act as biomass fuel. So not only is the process environmentally-friendly, it’s free to produce.

"Diesel is now too expensive for people to buy, so the alternative is to use 'birin'", says Abu Saeed, supervisor at the factory.

The price of diesel has increased significantly in Syria in recent years as a result of the country's devastating decade-long war.

Are there lots of olive trees in Syria?

Although we may think of olives as being Greek, they actually originate in Syria.

Syria is the native homeland of the olive tree, where it has been cultivated for thousands of years as an important food source. Olive forests are extremely thick and abundant and trees grow to be quite old - some living for over 1,000 years and continuing to bear fruit into their old age.

The trees appear to have spread from Syria, Palestine and Iran to Greece and the rest of the Mediterranean basin 6,000 years ago.

In the past several hundred years the olive has spread to North and South America, Japan, New Zealand and Australia.

Click on the video above to learn more about how to make this eco-friendly fuel.