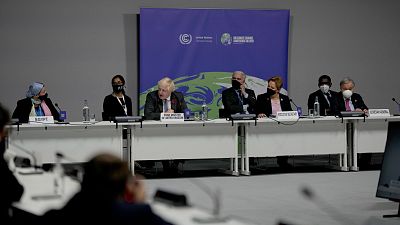 It was Transport Day at COP26 but it was all about "draft decision" day.

COP26 entered a new phase of negotiations on Wednesday after a first draft of the summit's final decision was circulated early this morning.

Here are five key takeaways as Day 10 wraps up:

1. Draft deal calls for end to coal use, climate plans boost by 2022

​The seven-page draft deal published on Wednesday urges countries to strengthen their climate plans by the end of next year and, for the first time, calls for the phasing out of coal and fossil fuel subsidies.

It also calls on developed countries to "urgently scale up" financial support for developing countries, responding to their need to adapt to the impacts of climate change.

Diplomats from the nearly 200 countries represented at the COP26 climate change summit in Glasgow have begun to negotiate the text hoping to strike a final deal before the conference comes to a close on Friday.

But the draft deal has had mixed reviews so far - especially from climate activists.

Jennifer Morgan, executive director of Greenpeace International, compared it to a "polite request that countries maybe, possibly, do more next year." That’s “not good enough,” she said.

Other critics have pointed that financial pledges in the text are lacking specifics.

“The text laments the failure to meet the already grossly inadequate $100 billion (€86 billion) climate finance target. But rich countries are crying crocodile tears - as the draft sets no plans, pledges or deadlines to provide the money owed to help developing countries cope with climate impacts, and an alarming call for private finance for adaptation,” said Sara Shaw, Climate justice and energy programme coordinator at Friends of the Earth International.

The Alliance of Small Island States said in a statement that the draft COP26 decision released on Wednesday "provides a basis for moving forward but needs to need to be strengthened in key areas."

UK Prime Minister Boris Johnson made the trip to Glasgow to press negotiators to find a compromise. "We know what needs to be done but we just need the courage to get on and do it," said Johnson.

While he refused to single out any individual leaders or nations who are "standing in the way of progress," he urged everyone to step up and move forwards.

“My big, big ask of all of you is to please come armed with the currency of compromise,” said Sharma. “What we agree in Glasgow will set the future for our children and grandchildren.”

“I request us all collectively to please roll up our sleeves and get to work,” he added.

Today was also Transport Day at COP26 and there was a raft of announcements about zero-emissions vehicles.

A group of countries and companies signed a pledge to switch to emissions-free cars by 2040 and by no later than 2035 in leading auto markets.

Critics pointed out that large countries including the US, Germany, China and Japan stayed out of the deal, along with some of the world's biggest car manufacturers.

The International Energy Agency says that 60 per cent of new car sales need to be battery-electric by 2030 and internal combustion engine cars need to be phased out by 2035 to keep below 1.5C. Many believe this pledge is not ambitious enough to achieve that.

5. Saudi Arabia accused of watering down climate commitments at COP26

Saudi Arabia’s energy minister has denied allegations that his country was working to slow down negotiations and water down commitments at COP26.

It is "a false allegation, a cheat and a lie," Prince Abdulaziz bin Salman al Saud told reporters on Wednesday.

Saudi Arabia’s team in Glasgow has introduced proposals ranging from a call to quit negotiations at 6 p.m. every day to what climate negotiation veterans allege are more complex efforts to block agreement on tough measures.

Saudi Arabia, the world’s largest oil producer, and a handful of other countries long have been accused of seeking to block measures that would crack down on fossil fuels.

“Other governments now need to isolate the Saudi delegation if they want this” conference “to succeed for everyone, not just fossil fuel interests,” said Greenpeace's Jennifer Morgan.