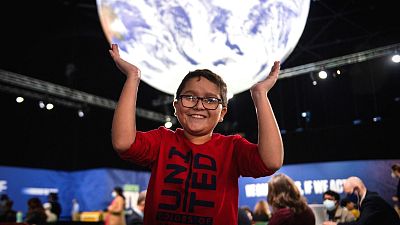 Francisco Vera is not your ordinary kid.

At the age of just six, the primary school student was attending bullfighting protests in his hometown of Villeta.

Fast-forward to 2019, and Francisco had founded an environmental group boasting over 200 members in 11 provinces across Colombia.

“Growing up surrounded by nature was an inspiration,” says Francisco.

“Knowing your country, knowing where you live, it opens your eyes to where you are standing.”

Now the 12-year-old is among the foremost climate activists at COP26, where he is calling for world leaders to include young people in the ongoing talks and negotiations.

“The voice of young people is very important,” he continues.

“We have a strong and clear voice and opinion on this issue, because we are the future. We are a generation of the present and there are billions of children who are suffering from climate change.”

The activist has received both praise and criticism for being so outspoken.

In January of this year, the UN hand-delivered a letter of congratulations to Francisco, celebrating his pioneering environmental work in the South American country.

But he also received death threats after urging the government to improve internet connectivity for children studying online.

“Some people seriously do not understand the climate crisis situation,” says Francisco.

He is now urging the Colombian government - who committed to protecting 30 per cent of their land by 2022 - to do more to prevent further damage.

“Colombia is among the 20 countries most affected by climate change. It is not a game to make fun of. It is a game of life and death that has us on the brink of the mass extinction of the species.”