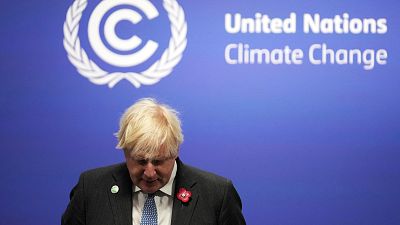 World leaders descended on Glasgow for a crucial climate summit on Monday, as they begin two weeks of intense diplomatic negotiations on how to tackle climate change.

The UN’s COP26 will see leaders set out their countries’ plans for curbing greenhouse gas emissions and dealing with the effects of a warming planet.

UK prime minister Boris Johnson and the UN’s secretary-general Antonio Guterres welcomed leaders one by one as they arrived at the summit, but the mood is not positive, with both men warning time is running out for the world to get serious.

On the eve of the conference, at the meeting of the G20 in Rome, Johnson claimed “if Glasgow fails then the whole thing fails,” while Guterres said he was leaving Rome “with my hopes unfulfilled - but at least they are not buried.”

At the G20 the leaders of the world’s 20 biggest economies made mild promises on climate action, including a compromise agreement on reaching carbon neutrality “by or around mid-century” - which Johnson said were mere “drops in a rapidly warming ocean.”

More than 120 leaders are heading to Glasgow for the first two days of the 12-day summit, the highest-profile climate summit since the COP21 in Paris in 2015 when the Paris Agreement was formalised.

The agreement states that global temperature increases must be limited to 1.5C to avoid catastrophic effects of climate change.

Many scientists say the chances of meeting that goal are slipping away.

The world has already warmed by more than 1.1C and current projections based on planned emissions cuts over the next decade are for it to hit 2.7C by the year 2100.

The amount of energy unleashed by such planetary warming would melt much of the planet's ice, raise global sea levels and greatly increase the likelihood and intensity of extreme weather, experts warn.

Activists, many of whom have travelled and even marched thousands of kilometres to reach the summit, have been gathering in Glasgow to urge world leaders to turn words into action on the climate crisis.

Some of the issues being discussed during the talks have been on the agenda for decades, including how rich countries can help poor nations tackle emissions and adapt to a hotter world. The slow pace of action has angered many environmental campaigners, who are expected to stage loud and creative protests during the summit.

India, the world's third-biggest emitter, has yet to follow China, the US and the European Union in setting a target for reaching ‘net zero’ emissions. Negotiators are hoping India's Prime Minister Narendra Modi will announce such a goal in Glasgow.

At the Vatican on Sunday, Pope Francis appealed to the world's people to pray that world leaders' realise the suffering of the Earth and the poor as the climate warms.

In Rome, leaders of the G20 nations accounting for 75% of greenhouse emissions were negotiating on what commitments they’re willing to make to contain rising global temperatures.

The UK's Prince Charles urged world leaders to heed the “despairing voices” of young people who will bear the brunt of climate change. The heir to the British throne described the talks in Glasgow as “literally the last-chance saloon” for the Earth.

Charles told Group of 20 leaders that they have an “overwhelming responsibility to generations yet unborn.”

On Monday, Charles is due to welcome leaders in Glasgow. His 95-year-old mother Queen Elizabeth II was due to attend but has been advised to rest by her doctors.