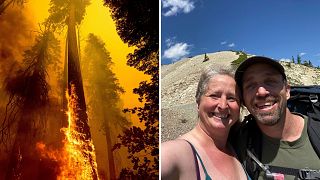 On the right, a photograph of Samsara Duffey and her husband Mark Duffey   -   Copyright  AP/Samsara Duffey
By Doloresz Katanich  with Reuters  •  Updated: 28/10/2021

Husband and wife, Samsara and Mark Duffey, have dedicated their lives to fighting devastating wildfires in the US, even though it keeps them apart.

When the alarm at his base in southern Montana goes off, Mark has around five minutes to put on his jumpsuit and gear and hop on a plane. Following in the footsteps of his father, he is a member of an elite squad of smokejumpers. Smokejumpers are a small group of first responders who plunge from planes to tackle remote wildfires.

"Getting out and fighting fire I feel it's an important task and important job to be done, feel a pretty good sense of accomplishment when we are able to get on a fire and catch it, put it out," says Mark.

Since 1998, he has completed more than 100 fire jumps. Once on the ground, he and seven other smokejumpers get as close to the fire as possible and start working. Often, they dig a ditch in the earth to try and box the fire in.

While Mark is preparing to parachute out of a plane, 450 kilometres away his wife Samsara spends her days peering through a pair of binoculars on a mountaintop. She's trying to spot the tiniest curls of smoke and report any fires as early as possible.

For 25 straight summers, Samsara has been retreating into the wilderness to work as a fire lookout during the fire season.

This old-fashioned way of spotting blazes grew popular after terrible fires swept across the Northwestern states in 1910, burning an estimated 3 million acres. Nowadays infrared cameras and drones replace the human eye but around 400 lookout towers are still operational. The little cabin on top of the Patrol Mountain in Montana is one of them.

After spotting some 50 fires throughout her career, Samsara gets a jolt when she spots a fresh one. "My heart starts racing, and I get a little short of breath," she says.

Being a sentinel here comes with a 360-degree panorama of the Montana wilderness below, and a lot of solitude. The lookout is hours from the nearest town, groceries only arrive every three weeks, and tourists are few and far between.

This is how the Duffey's spend their summers: apart, unable to see each other for weeks on end, but united in fighting the American West's worsening forest fires.

"The longest I think we have gone without seeing each other is six and a half weeks, but I think our average is more like four weeks, four to five weeks, but it just depends on the fire season," says Samsara.

No matter where he is, he's watching the same moon and the same sun.

Samsara and Mark met in early 2012 at a class about information-sharing in West Yellowstone. In May 2015, they got married in a civil ceremony in Helena with no guest list - just the two of them. About a week later, Mark was sent out to a wildfire.

In the western United States, climate change is raising temperatures and exacerbating drought, resulting in a particularly hellish fire season this year.

Blazes have torn through 4.9 million acres of the United States, an area 21 per cent greater than the total burned in the same period in 2020, the worst year on record.

Watch the video to see how Samsara and Mark combat wildfires.